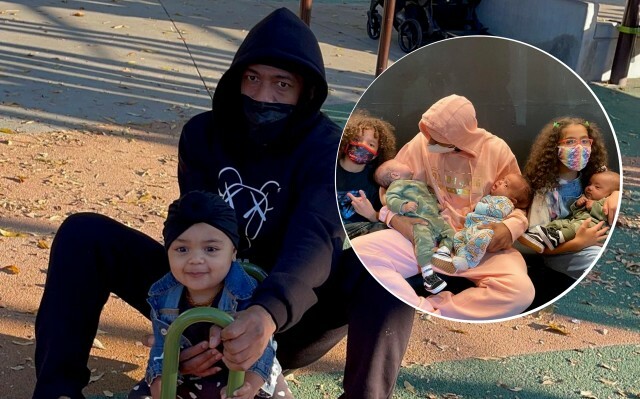 Nick Cannon spent quality time at a park with his daughter, Power Queen. The duo enjoyed all that the playground had to offer, including a seesaw.

Nick shared a photo of him and his one-year-old sitting on the playground equipment with the caption, “Told my Queen “Life is like a SeeSaw, We gotta be down for each other to Rise Up!”

“Still missing my little dude… His Spirit and brightness were soo strong #ZensLight,” Cannon shared on Instagram on Friday.

He continued, “To be absent from the body, is to be present with the Lord”. 2Corinthians 5:8 The whole family, We ALL miss you young King! Forever Our Angel!”

Zen, who was only five-months-old at the time of his death, was diagnosed in August with high-grade glioma, a rare and aggressive form of brain cancer. Shortly after Zen’s death, Nick Cannon opened up to People Magazine about how his other six kids have helped him through grieving.

“Them being there for me probably helped me keep it together and really deal with it,” the TV host told the popular news outlet.

He continued, “Having to explain that to 10-year-olds (Moroccan and Monroe) and a 4-year-old (Golden) is pretty intense. But their understanding and them being there for me probably helped me keep it together as well as really deal with it. Specifically, even, Roc and Roe. They were there for the entire journey.”

“My daughter, really, she’s so in tune and in line and wise beyond her years,” Cannon said in the interview of his daughter “Roe”. “I got a lot of therapists, but she’s probably my best therapist.”

He added, “She keeps me in check. “She’s so pure and so honest. To be 10, she asks some really strong and powerful questions. Really, just it’s all out of love. She’s my oldest child. Even though they’re twins, she came out first and she lets everybody know it. She’s helped me keep it strong.”