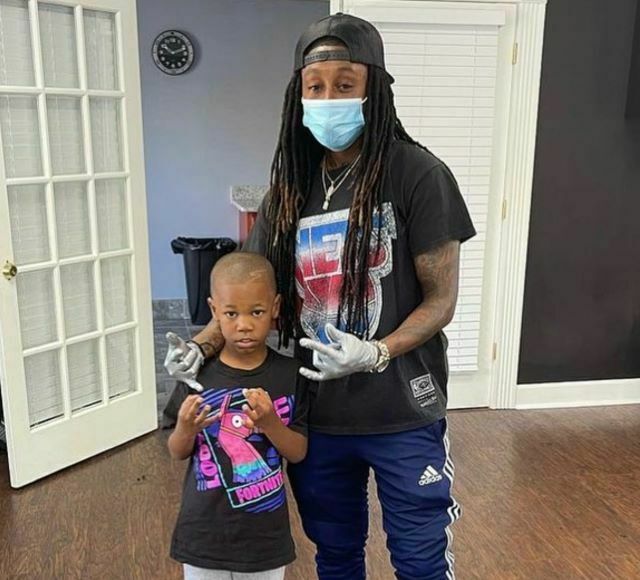 Having a child with autism sometimes presents unique challenges that people don’t realize. The “simplest” of tasks, like getting a haircut can sometimes pose a challenge. Well, one barber met the challenge with flying colors and scored a goal as she turned getting a haircut into a game for Dr. LaQuista Erinna’s six-year-old autistic son, Jackson.

Dr. Erinna posted a video of Jackson’s haircut on social media and of course it has gone viral with 4.5 million views on TikTok alone!

“@expozdcutz (put some respeck on her name) has been a blessing to my family. When your kid is on the spectrum, people don’t want to be bothered,” Dr. Erinna posted on Instagram.

She continued with the story, “She’s always been so patient and kind to Jack-Jack. Yesterday was an epic meltdown. I usually have to do some coaching to get him in the chair. He will put on his headphones, and we power through. Yesterday he forgot his headphones, and it went downhill fast. He refused to sit in the chair and just lost it. Ree noticed his Super Mario bro hoodie (he’s low-key obsessed) and told him that he needed to save Mario by making sure no hair gets on him. She cut his hair while he moved and ran around the shop. His smile at the end was priceless.”

The superhero barber is Sheree Bethea of Atlanta known in her community as “Ree the Barber.” Recently, on an episode of Good Morning America, Ree told the morning crew in her own words exactly what she was thinking to help Jackson make it through.

“The reason why we were running was because the Mario on the chair was going to come attack us if we didn’t run. I’m thinking if he’s running, if he’s moving, he’s not going to pay attention to me cutting his hair. I was trying to distract him.”

Erinna’s eldest son, 16-year old Jordan, regularly gets his hair cut by Ree in her Duluth, Georgia studio. Sometimes, Jackson tags along to watch, but it is different for him when he is the one in the seat. Although it is a a different experience for him, Ree makes sure that it is an equal one.

“We all deserve to be treated equally, we’re all one,” Ree said in her interview. “I’m gonna give you my all. If I’m not giving you my all, we’re not done, it’s not complete.”

MATTHEW CHERRY HAS TEAMED UP WITH DOVE FOR SOME "HAIR LOVE"

MATTHEW CHERRY HAS TEAMED UP WITH DOVE FOR SOME "HAIR LOVE"