"And Y'All Thought I Was Out For The Week?" 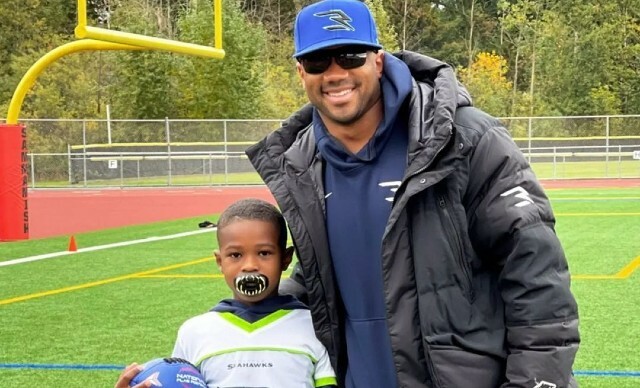 Russell Wilson may not be on the field right now, but that doesn’t mean he cannot support his stepson, Future Zahir. The Seattle Seahawks player was recently spotted while coaching at his stepson’s flag football game.

“And y’all thought I was out for the week,” Russell asked his fans. “We still ballin’,” the NFL star declared.

Russell Wilson is at home recovering from a finger injury that led to surgery. The operation was reportedly conducted to repair torn tendons and to also insert screws in his middle finger. The surgery directly affected Russell’s ability to play football as it took place on his throwing hand. Wilson is expected to miss about four games before returning to the field.

Some saw as Russell Wilson was taken out of the game last week as the Seattle Seahawks player bashed his hand into the arm of Los Angeles Rams defensive tackle Aaron Donald. The incident occurred during the third quarter of the game that the Seahawks ultimately lost. Still, Russell remains hopeful for the season ahead and his ability to continue coaching his stepson’s team to victory while he recovers.

Some grew convinced that Russell would leave the Seahawks for greener pastures after trade talks reached an all-time high. “It’s the whole process, and I think things get kind of blown out of proportion a little bit, and teams were saying that I requested a trade,” Wilson recently said of the rumors that turned a few months back. “So it kinda got a little confused,” the NFL player shared with FOX Sports.

“Coach and I spent a lot of time together … just talking life, talking ball, talking about where we both want to go and what we want to do,” Russell said of his relationship with Seattle Seahawks coach, Pete Carroll. “The amazing part about it all – we both want to go to the same place, and I think for us, we know that’s what we want to do, and what we’re committed to and that’s what we’re focused on.”

Future Zahir is Ciara’s son with rapper Future. The ‘Beauty Marks’ singer has two kids, Win and Sienna, with her husband.

USHER AND GIRLFRIEND JENN GOICOECHEA WELCOME THEIR SECOND CHILD TOGETHER