Home » NEWS » PORSHA WILLIAMS, SIMON GUOBADIA AND KIDS ARE LIVING IT UP IN COSTA RICA 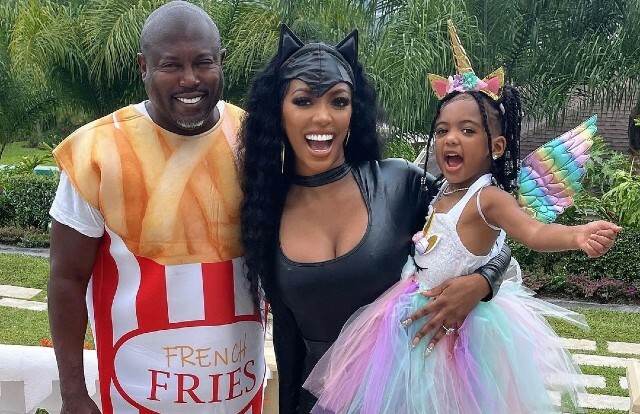 Porsha Williams and Simon Guobadia are enjoying time spent in Costa Rica with their kids. Porsha recently uploaded videos and photos of her taking in the atmosphere with her daughter, Pilar Jhena McKinley.

One video clip featured Pilar Jhena enjoying a meal. “Love watching babies eat,” Porsha mused regarding her little one eating while being filmed. “[She is eating] like nothing even matters,” Williams told her social media fans.

“PJ [is] eating good,” Joseline Hernandez wrote in response to watching the video clip of Pilar Jhena enjoying her food. “I love it,” Joseline exclaimed. Another social media follower said, “She’s so neat when she eats! And she’s absolutely beautiful.”

Porsha and Simon are cultivating their relationship sans the camera crew. It was just the other week that Williams announced her decision to leave the Real Housewives of Atlanta (RHOA) franchise after a decade of serving as a cast member of the hit reality series.

“After ten life-changing, gratifying, incredible years, it is finally time to begin my next chapter,” Porsha told her fans in an Instagram post. “Next season, I will not be returning to the Real Housewives of Atlanta franchise,” Williams shared.

“This was a difficult decision to not only make but also come to terms with,” the celebrity mom revealed. “It’s one I have put a lot of thought into and because of that, I know it’s the right one,” Porsha declared.

Some remember when Porsha Williams joined the cast of the Real Housewives of Atlanta in 2012. Porsha came with immediate drama as she clashed with Kenya Moore during a charity event that benefitted the homeless. Williams asked Moore to leave the event after things got heated.

The rivalry between the ladies reached an all-time high during the Season 6 reunion special. Porsha physically attacked Kenya and was subsequently suspended from the franchise for a season.

Kenya and Porsha have mended their differences and are ultimately in good places when it comes to their relationship. Filming for the upcoming season of the Real Housewives of Atlanta is expected to begin this month.