"Please Allow Me To Introduce..." 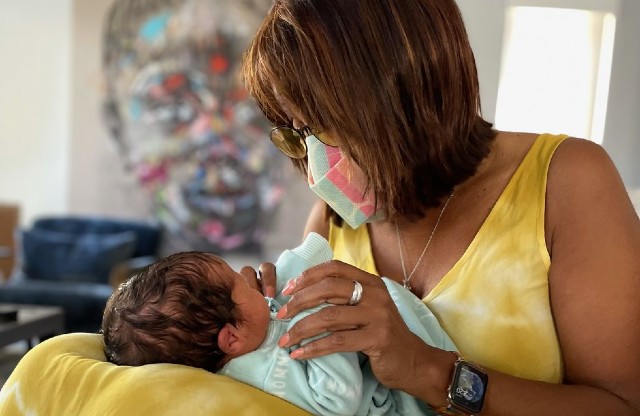 Congratulations to Gayle King who is officially a grandmother! The CBS Mornings co-host’s daughter, Kirby Bumpus, and her son-in-law, Virgil Miller, recently welcomed a son.

“I’m officially a grandmother!” King said during Monday’s morning show broadcast. “It’s really something when you see your own child become a parent. I am so nuts about him.”

“Please allow me to introduce to the world Luca Lynn Miller,” Gayle King shared with her Oprah Daily fans. “His middle name is Lynn,” the co-host shared. “Virgil lost his brother earlier this year so little Luca has his uncle’s middle name,” Gayle explained regarding Luca’s middle name. “We already call, his initials are LLM so we call him LL Mill. LL Cool Mill.”

King went on to celebrate the new chapter of “grandma” with her fans. “It’s really something when you see your own child become a parent,” the celebrity revealed. “I am so nuts about it,” King shared. “I was holding him, Kirby was like, ‘You have to support his neck.’ I said, ‘Yeah, OK, I actually know how to do this.’ But I am so grateful.”

Gayle King shared the news of her daughter’s expectancy during an interview with Ellen DeGeneres earlier this year. “Listen, I’m the oldest of four girls,” King said when addressing the then-unknown gender of her grandchild. “My whole life I wanted a big brother,” Gayle shared. “My whole life,” the celebrity reiterated. “I just saw that people with big brothers were lucky. So I always like a firstborn to be a boy, then the second one is a girl. Then you have a big brother that takes care of you. That’s just my own little fantasy.”

King got her wish as Luca is indeed a boy. “Congratulations to my favorite daughter and favorite son-in-law,” the celebrity wrote to her daughter and son-in-law. “Now I have a favorite grandson,” Gayle said. “I didn’t even wanna hand him back when he was crying. I didn’t wanna let him go.”

Gayle King has two kids, Kirby and William Jr., in all.