Home » NEWS » USHER DOTES ON HIS DAUGHTER IN SWEET VIDEO: ‘ON DADDY DUTY’

USHER DOTES ON HIS DAUGHTER IN SWEET VIDEO: ‘ON DADDY DUTY’ 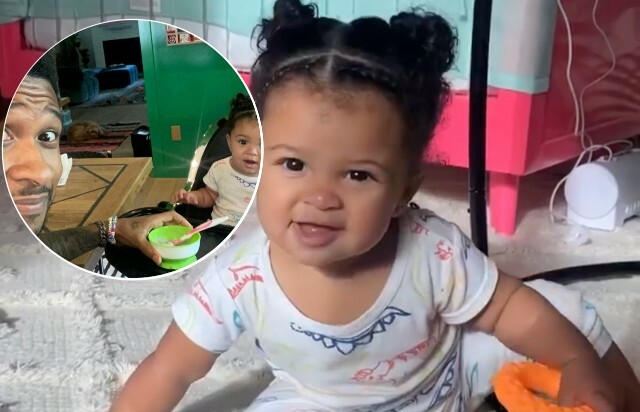 Usher Raymond is a doting daddy!  The singer took to his Instagram story on Friday to share video clips of him on ‘daddy duty’ with his 11-month-old daughter Sovereign.

In the video, Sovereign can be seen sitting on the floor and playing with a toy. ”Got the boys up and off to school. I’m on daddy duty. What’s up Sovie?’  Usher says in the clip.

“She came out early,” Usher told Ellen DeGeneres while appearing on her television show. “She was scheduled to be a Scorpio but decided she had a different plan. Libras, you know, they kinda have their minds made up what they wanna do.”

“It’s funny because the umbilical cord was wrapped around her wrists. So she’s pulling the thing, like, ‘Pull me outta here, it’s time to go!’ ” he recalled.

As for Sovereign’s name, Usher said in an interview with ExtraTv: “So Sovereign… is such a beautiful word and name to me, you know, a supreme ruler is obviously the defined name… She’s definitely ruling the household, but Sovereign Bo Ray — Bo is at the end of it, so she’s my little reign-bo,” he said pronouncing it like rainbow. Gushing, he added, “I’m on diaper duty plus, man, and she has yummy toes. Yes, I can’t help it.”

As for Usher’s sons Naviyd Ely, 12, and Usher V, 13,  “they’re coping well” with having a baby sister around and are “excited about being big brothers,” he said recently. But at the same time, “they’re a little bit too protective, even with me sometimes.”

“And as they get older, I’m less cool of a dad, so now I’m starting this whole cycle over again and I’m kind of the apple of [Sovereign’s] eye right now,” Usher said.

The ‘Let It Burn’ singer is expecting his fourth child — his second with girlfriend Jenn Goicoechea —  in coming weeks. We can not wait to meet the latest addition!

CARDI B AND OFFSET ARE 'OVERJOYED' TO MEET THEIR BABY BOY

CARDI B AND OFFSET ARE 'OVERJOYED' TO MEET THEIR BABY BOY