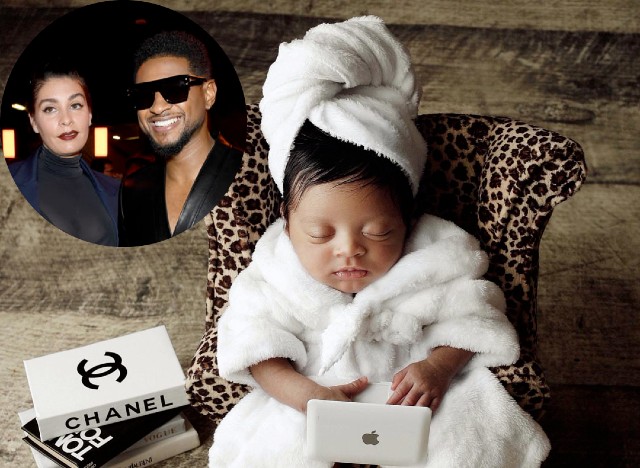 “Happy 11:11 Sovereign … today was the day I thought you would arrive. You had a different plan,” Usher wrote on his Instagram. “Life happens when you’re making other plans.” Is the present a gift or is the present the day? Live every moment. I love what we have, and what made @boogsneffect Te amo mucho.”

During an appearance on The Ellen Degeneres Show, Usher further explained that his daughter “was scheduled to be a Scorpio but decided she had a different plan. Libras, you know, they kinda have their minds made up what they wanna do.”

He added, “It’s funny because the umbilical cord was wrapped around her wrists. So she’s pulling the thing, like, ‘Pull me outta here, it’s time to go!’ ”

As for Sovereign’s older brothers, “they’re coping well” with having a new baby sister around and are “excited about being big brothers,” he said. But at the same time, “They’re a little bit too protective, even with me sometimes.”

“And as they get older, I’m less cool of a dad, so now I’m starting this whole cycle over again and I’m kind of the apple of [Sovereign’s] eye right now,” Usher added.

Usher Raymond and Jenn Goicoechea welcomed their daughter on September 24, 2020. The singer shared the news of his daughter’s arrival with fans shortly after his girlfriend gave birth. “We are feeling blessed and full of love with the arrival of our beautiful baby girl, Sovereign Bo Raymond,” the celebrity father told his social media followers.

CHANCE THE RAPPER, WIFE, AND KIDS POSE IN PICTURE-PERFECT PHOTOS