FALYNN GUOBADIA SAYS SHE IS ‘JUST A FEW MONTHS’ PREGNANT

"No, I'm Not Eight Or Nine Months Pregnant" 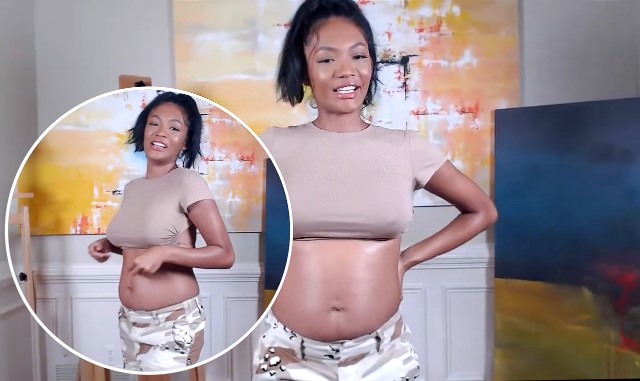 Falynn Guobadia took to YouTube in a Live session that followed her pregnancy announcement on Tuesday (August 17).

“No, I’m not eight or nine months pregnant,” Falynn told her social media fans. “I am just a few months,” she added. “It’s still kind of blubbery. It’s not a hard surface just yet. We’re just a blob right now, but it will harden.”

Falynn Guobadia and her boyfriend, Jaylan Banks, announced their expectancy via YouTube on Tuesday. “Jaylan and I will actually be having a baby,” Falynn told her fans. “Jaylan and I are expecting,” she continued. “We are adding another little one to the crazy bunch. It is Jaylan’s first baby.”

Falynn and Jaylan’s announcement came after weeks of speculation. Simon Guobadia told fans in June that his ex-wife was expecting a child with another man, which served as his reason for filing for divorce.

“Let’s start with why I filed for divorce,” Simon said in June. “Let’s start with who cheated with and [is] currently pregnant for and living in a home I paid for – post-divorce,” the businessman said. “His Instagram handle is @itsjaylanbanks and this is how your generosity gets twisted.”

Fans gave Falynn Guobadia sympathy at the time because it was revealed that he was in a relationship with RHOA star Porsha Williams. Some social media followers, however, have begun to move their support to Simon with Falynn’s expectancy announcement.

“But the first interview you had you looked all sad and claiming you wanted to save your marriage but girl you wanted people to feel sorry for you when you actually knew you was (sic) pregnant,” one fan said in a sort of rebuke of Falynn during her Live session on Tuesday. Another viewer wrote, “She’s more than three months. And Simon said she was pregnant for this guy in June … someone enlighten me.”

Falynn and Simon shared eight kids together during their marriage. Falynn has three biological children in all. She and her boyfriend are expecting their little one to arrive later this year.

MADONNA CELEBRATES BIRTHDAY WITH ALL SIX OF HER CHILDREN