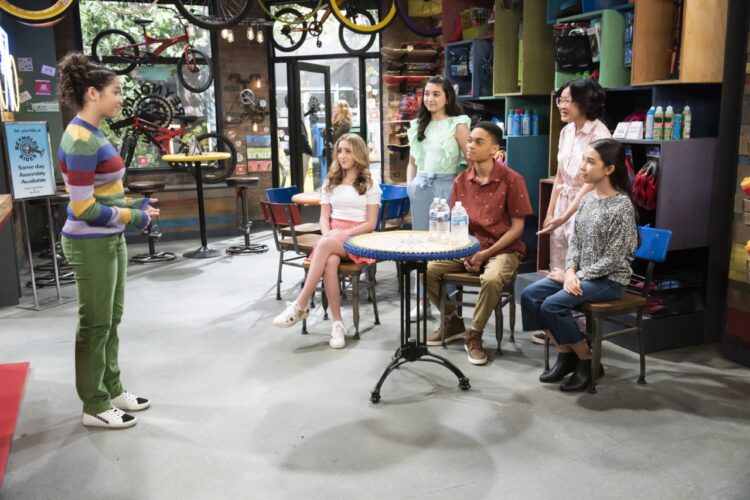 Make sure to tune-in tonight at 8:25 pm ET/PT as Disney’s Sydney to the Max gears-up for another powerful episode.

“Do the Write Thing,” will be directed by Raven’s Home‘s Raven-Symoné. This truly amazing episode will share invaluable lessons with the audience on the impact of identity-based microaggressions, the importance of people feeling a sense of belonging, and the power in standing up for yourself.

Want to know more? Well, here’s a brief synopsis of what viewers can expect.

In “Do the Write Thing,” Sydney suspects her teacher, Ms. Anderson, has assigned everyone in her class historical figures to write about based on their race. When Sydney talks to her classmates, they confirm her suspicions and explain the discomfort they felt when they received their assignments. The students agree to confront Ms. Anderson about their concerns and elect Sydney as their spokesperson. In the 90s, Vice Principal Virmani arranges for a local reporter to interview Leo about his work as founder and president of the school’s computer club, the same club he encouraged his buddy Max and his cousin Alisha to join. Leo provides a great interview and highlights of his work and is excited until the story runs, incorrectly featuring a picture of Max with the title of Club President.

And of course the cast is weighing in on this truly important episode. Here’s what Ruth Righi, Christian J. Simon, and guest star Julia Garcia all had to say in a recent virtual Q&A about the episode when it came to their first reactions to the content.

Ruth Righi: I actually had a little head start knowing that we were doing this episode before we even started season three. I talked with the writer/creator Mark (Reisman) and some of the producers on all the topics that we were going to talk about in season three, which are so incredible. I guess I just I feel really appreciative that our show is an outlet for normalizing these topics because they happen. It’s important for kids to be able to see it and talk about it with their families and just have a relatable source to now learn from them in this fun-loving fashion.

Julia Garcia: “My first reaction when I got the script, I said finally! And when I saw that they put that I’m Cuban and Filipino in there, thank you to the writers. I feel so blessed and definitely feel empowered after doing that episode.”

Ruth and Christian go on to discuss relatable moments in their own lives.

Ruth: “The writers are so incredible that they kind of got it spot on with a lot of us and what we really experience. I mean, because microaggressions aren’t always original. There’s a lot that are overused and stereotyped. So I think a lot of us had experienced exactly what the writers had our characters experience. And I remember even talking about that with everyone like that has happened to me.”

Christian: “All the time. But, you don’t have to do it alone. You can always ask people in your circle, teachers, a coach, a principal, friends, grandparents, etc. There’s so many people around you who want to help you just have to ask and don’t be afraid to use your voice.”

This is not the first time this year that the popular Disney show tackled an important subject matter. Back in April, if you remember, the cast and crew accompanied Syndey on her black hair journey.

Sydney to the Max was created by Emmy® Award-nominated writer, showrunner and executive producer Mark Reisman and is a production of It’s A Laugh Productions, Inc. It carries a TV-G parental guideline.

FANTASIA AND HER BABY GIRL ARE 'ALMOST HOME' AFTER PREMATURE BIRTH