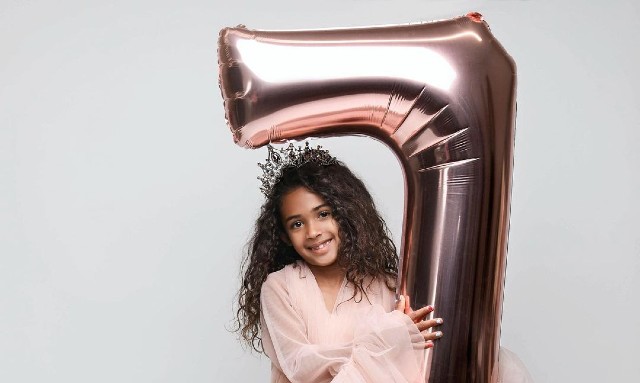 Chris Brown is in full celebration mode as his daughter, Royalty, celebrates her seventh birthday. The youngster turned the Big 7 today (May 27), and her dad was sure to take to Instagram to commemorate.

“HAAAAAPPPPPPYYYYY BBBBBIIIIIRRRTHDAAAAAYYYYYY @missroyaltybrown,” Chris shared on his social media platform. “THE BIG 7,” the celebrity father exclaimed. Chris also uploaded several pictures to commemorate his daughter’s birthday. Royalty wore a crown while giving the camera her best expressions in all the shots.

Royalty’s mom, Nia Guzman, also wrote a special message to her daughter on the youngster’s birthday. “This is #SEVEN,” Guzman told her social media fans. “Happy birthday my Royalty,” the celebrity mom shared. “You are one of the most beautiful angels walking this earth!”

Royalty Brown made Chris Brown a father for the first time on May 27, 2014. The celebrity father released an album months after welcoming his daughter that shed light on his new life as a parent.

“Learning how to be a dad, especially learning how to take care of somebody else, you know, I barely know how to brush my teeth in the morning,” Chris Brown jokes during an interview with Ryan Seacrest of On-Air With Ryan Seacrest in 2015. “It’s actually great,” the celebrity father said. “It’s very humbling,” he added.

“You know, it’s very calming. I think I was a lot, you know, rambunctious, very hyper as a kid but now seeing that 10 times over, my daughter’s kinda like mellowing me out.”

Royalty Brown has launched several business ventures with the help of her mom since celebrating her first birthday. To date, Royalty has explored the beauty industry as well as the field of wellness.

Royalty is Chris Brown and Nia Guzman’s only child together. Chris also has a son named Aeko with model Ammika Harris who turns 2-years-old in November.