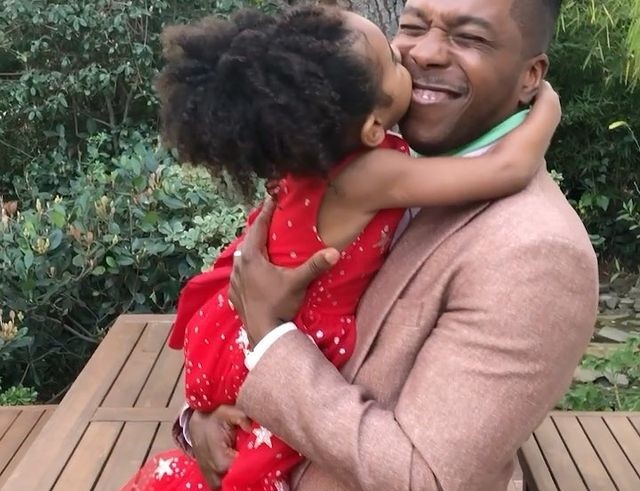 Leslie Odom Jr. enjoyed the Golden Globe Awards with his family on Sunday (Feb. 28). The Hamilton star shared kisses with his daughter, Lucille Ruby, during the ceremony that made his supporters smile in celebration of the father-daughter moment.

The clip, captured by Phoebe Joaquin and uploaded to the Golden Globes’ Instagram account, began with Lucille Ruby giving her father one kiss. The little one did not let much time pass before ultimately showering her dad with loads of kisses.

“Beautiful,” one Golden Globe Instagram subscriber said after seeing the cute segment. “Handsome and the cutest,” another social media follower wrote in reference to Odom and his daughter.

There was much to celebrate in the Odom household prior to Sunday’s award ceremony. Leslie and his wife, Nicolette Robinson, are expecting their son to arrive in the coming days.

“We’re weeks away,” Leslie Odom shared with the press at Sunday’s pre-show event. “We’re like, 3 weeks away,” the celebrity father added. “We’re trying to store up sleep. Is that a scientific thing,” Odom jokingly asked. “Can I get as much sleep now, and then like a bank? Withdraw on it later?”

Leslie Odom Jr. and Nicolette Robinson are expecting their second child together. The celebrity couple celebrates their ninth wedding anniversary this year.

PHOR OF 'BLACK IN CREW: CHICAGO' NINA AUSTIN ARE EXPECTING A BABY BOY!

PHOR OF 'BLACK IN CREW: CHICAGO' NINA AUSTIN ARE EXPECTING A BABY BOY!