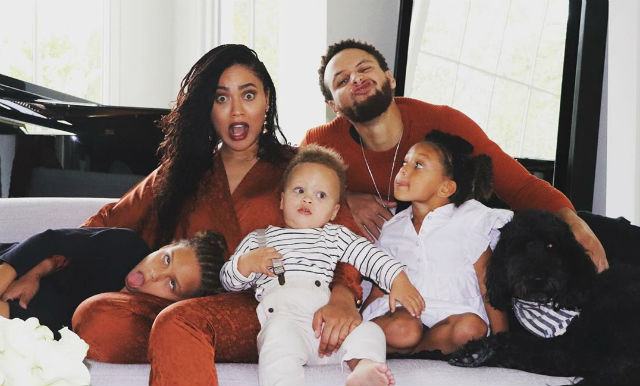 Golden State Warriors star Steph Curry is a three-time NBA champion and widely considered to be the best shooter the NBA has ever seen, but his wife Ayesha says that he’s found a new calling as their kids’ teacher.

Steph and Ayesha Curry are proud parents to three children, 8-year-old Riley, 5-year-old Ryan, and 2-year-old Canon Curry. In a recent interview on the Kelly Clarkson Show, Ayesha discussed how Steph has settled into his role as his kids’ homeschool teacher amid the COVID-19 pandemic.

Camped in the yard last night and watched jumanji. Love this little fam of mine.

“Luckily for me, Stephen has really stepped in with the education and their schooling and I’m OK with that because I said you know, ‘I birthed them so now you can birth and nurture their education,'” Ayesha told Kelly. “I’m so grateful. He’s making up for lost time to be quite frank. Because he would sleep through all the diaper changes in the late nights when they were babies, and so now this is his strong suit.”

Steph Curry may be the kids’ teacher, but when comes it to preparing meals he leaves it to Ayesha, a chef who recently released her second cookbook, The Full Plate. She discussed it with Kelly, saying that in the four years between her first and second cookbook: “Life was really chaotic and I wanted the book to reflect that. And so, it’s filled with quick and easy recipes that don’t lack flavor.” Ayesha Curry even gets her kids involved in cooking, and it has helped the children become more flexible eaters. “They love helping me as much as I let them. We often cook together, and I lucked out with them ’cause they’re super adventurous eaters, so that’s always been nice,” said Ayesha. “But I think it’s because they cook with me and have a hand in making the meals occasionally — that’s why they’re interested in trying new things.”