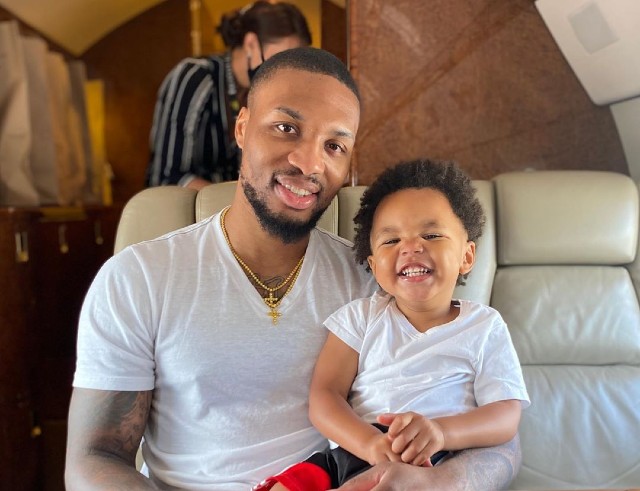 It may not be under the circumstances he hoped for, but Portland Trail Blazers star Damian Lillard is happy to be reunited with his fiancee Kay’La Hanson and their 2-year-old son Damian Lillard Jr. after leaving the NBA’s “bubble.”

Damian Lillard left the “bubble” during the 2020 NBA Playoffs due to a knee injury, but he is great spirits since he gets more time to spend with his dear son and fiancee. He took to Instagram to post a sweet photo of himself and Damian Jr. and in the caption, he wrote: “Dislocated finger… Lateral knee sprain … but this is good for the soul … missed my baby boy ❤️.”

During the NBA’s restarted 2020 season, Damian Lillard shone in the eight seeding games, becoming the MVP of the seeding games and leading his Blazers to the final No. 8 spot of the 2020 NBA Playoffs in the Western Conference. The Trail Blazers faced the No. 1 seed Los Angeles Lakers in a best-of-seven series in the first round, and while they won Game 1, the Lakers won the next three games. As if being down 3-1 wasn’t bad enough, Lillard dislocated his left index finger in Game 2, sprained his right knee in Game 4, and was ruled out for Game 5.

Damian Lillard left the “bubble” to have his knee reexamined, where it was discovered that he won’t require surgery on his injured knee. That news is good for Lillard, but it may not make much of a difference for the Blazers since Lillard would have to quarantine for four days if he returned to the “bubble.” In any case, the Blazers are currently down 3-1 to the Lakers, so their days in the “bubble” are almost certainly numbered.

Living in the NBA’s restricted “bubble” away from their families has proven to be a challenge for NBA players, considering many of them are proud fathers; so for Damian Lillard, he is just glad to be able to spend some “Dame Time” with his son.