"I Thank Zaya For Teaching Me" 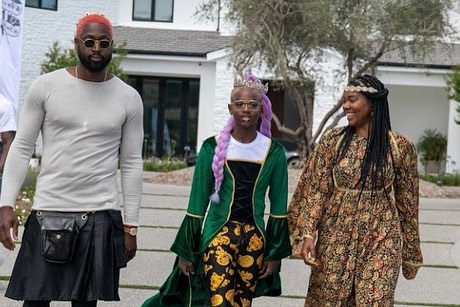 Dwyane Wade and Gabrielle Union are appreciative of their daughter’s courage and strength. The celebrity couple praised their teen, Zaya Wade, during the GLADD Awards.

Dwyane and Gabrielle were presenting the award for Outstanding Drama Series to the cast of Pose when the celebrity couple doted on their daughter. “We stand as allies with the LGBTQ+ community as proud parents of a transgender child,” Dwyane Wade said. “Our daughter Zaya is leading us in our journey, and we’re doing all we can to give every one of our kids the ability to live their truth.”

Zaya Wade came out as transgender to her family last year. The youngster revealed that she had researched a few things about the lifestyle and preferred to be called Zaya instead of Zion and wanted to be referenced as a girl going forward. Dwyane and Gabrielle respected Zaya’s wishes and heavily relied on her to help them better understand her transition.

Dwyane Wade admitted that he did not always have the ability to fully allow his daughter to live in her truth while presenting the GLADD Award to the cast of Pose on Thursday (July 30). “But I thank Zaya for teaching me, and GLAAD for elevating the images and messages that accelerate acceptance in every family,” Dwyane shared.

Zaya is Dwyane Wade’s child with his ex-wife, Siohvaughn Funches. The retired NBA player has four kids in all. Stay tuned for more celebrity family news!

BRANDY AND DAUGHTER SY'RAI DUET ON NEW ALBUM 'B7'

CRAIG MELVIN: 'MY WIFE AND I HAVEN'T HAD A CONVERSATION WITH OUR SON ABOUT RACE YET'

CRAIG MELVIN: 'MY WIFE AND I HAVEN'T HAD A CONVERSATION WITH OUR SON ABOUT RACE YET'