KIM KARDASHIAN AND HER KIDS GIVE FANS ‘THAT 90’S VIBE’ 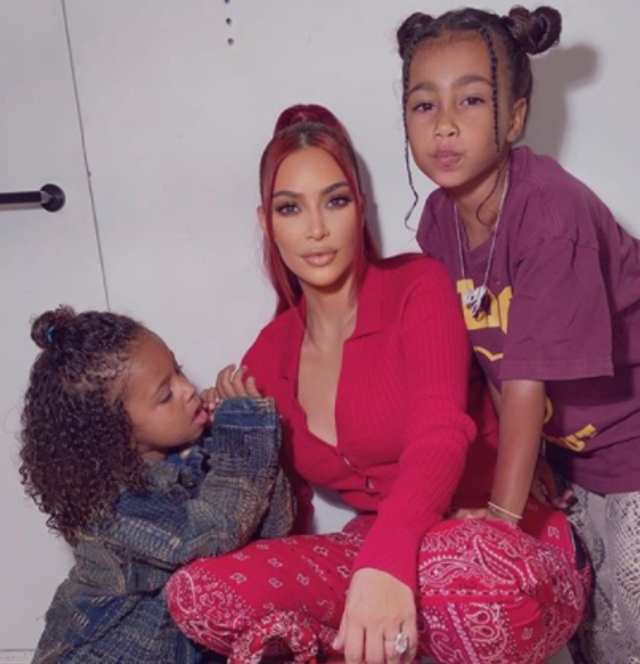 Kim Kardashian is enjoying quality time with her kids. The Keeping Up With The Kardashians (KUWTK) star recently shared pictures of her with herself striking poses with her daughter North and son Saint West.

In the candid, Kim sits between her children while rocking fashionable attire. “That 90s vibe though,” one fan shared after seeing the picture of Kim with her kids. “Lady in red,” another Instagram follower wrote in response to seeing Kim rocking red hair that matched her red outfit and purse.

All eyes appear to be on Kim Kardashian and her family after the KUWTK star’s husband, Kanye West, went on a social media rant following his first presidential rally in South Carolina. Kanye accused Kim and her mother, Kris Jenner, of trying to get him in a mental health facility. The rapper also told his social media fans that the movie Get Out by Jordan Peele was the story of his life.

“I [have] been trying to get divorced since Kim met with Meek [Mill] at the [Waldorf hotel] for prison reform,” Kanye wrote in his rant. The rapper also called Kris Jenner “Kim Jong-Un” in his social media tirade, which was a move some regarded as crossing another line. Kanye crossed the first line by some people’s standards when he told his South Carolina rally-goers that he and Kim considered aborting their first child, North West.

Kim Kardashian responded to Kanye West’s rant by reminding fans that her husband has bipolar disorder. “Anyone who has this, or has a loved one in their life who does, knows how incredibly complicated and painful it is to understand,” the KUWTK star shared.

“Those that understand mental illness or even compulsive behavior know that the family is powerless unless the member is a minor,” Kim added. “People who are unaware or far removed from this experience can be judgmental and not understand that the individual themselves have to engage in the process of getting help no matter how hard family and friends try.”

Kanye West issued an apology for his recent behavior last Friday (July 24). “I would like to apologize to my wife, Kim, for going public with something that was a private matter,” Kanye shared online. “I did not cover her like she has covered me,” the ‘Yeezus’ rapper admitted. “To Kim, I want to say I know I hurt you. Please forgive me. Thank you for always being there for me.”

Kim Kardashian and Kanye West have four kids together. Stay tuned for more Keeping Up With The Kardashians family news!