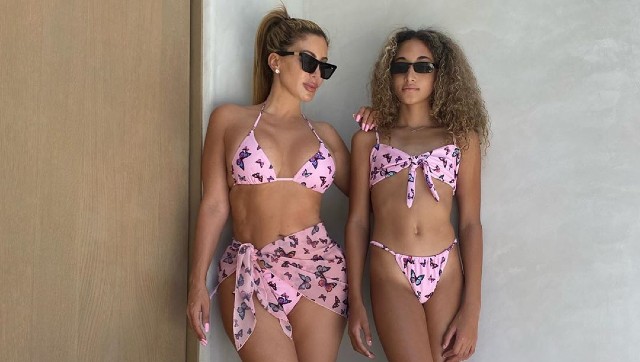 Larsa Pippen, ex-wife of NBA Hall of Famer Scottie Pippen, and their 12-year-old daughter Sophia Pippen were recently seen on Instagram in pink bikinis. However, some people accused Larsa of “pimpin” Sophia by letting her wear a mature swimsuit.

On July 18, Larsa Pippen posted the sizzling photo of herself and her daughter in matching pink bikinis with butterfly prints on her Instagram. In the photo, Larsa wears a classic triangle style bikini with a sheer wrap and black sunglasses. Sophia is seen with a similar tie-front top, high-waisted bottoms, and black sunglasses as well. Larsa captioned the photo: “Twinning 🦋 bikini: @whitefoxboutique.” Many people responded with compliments in the comments, like actress Gabrielle Union who posted: “💛💛.” Former NBA star Amar’e Stoudemire responded with: “Twins 👯‍♀️,” and Telli Swift, the fiancee of boxing phenom Deontay Wilder, wrote: “Too cute.”

While most people in the comments section thought the pair looked cute in their matching bathing suits, others criticized Larsa for allowing Sophia to wear such a daring swimsuit. Despite the fact that Sophia already has a modeling career, some people directed negative comments towards Larsa such as: “This is really sad it’s like pimping your kids for Instagram likes” and “How do u let a child dress like that?” One commenter called Larsa a “bad mom” and another one said: “Cover up your baby girl.”

Larsa Pippen, a model, entrepreneur and a frequent guest star on Keeping Up with the Kardashians, is known for her stunning snaps, as she shares frequent bikini selfies with her 1.9 million Instagram followers. In addition to their youngest child Sophia, Larsa and Scottie Pippen share 19-year-old Scotty Pippen Jr., 18-year-old Preston, and 15-year-old Justin Pippen. Although Larsa and Scottie divorced in 2018 after 21 years of marriage, they make sure their children are well taken care of.