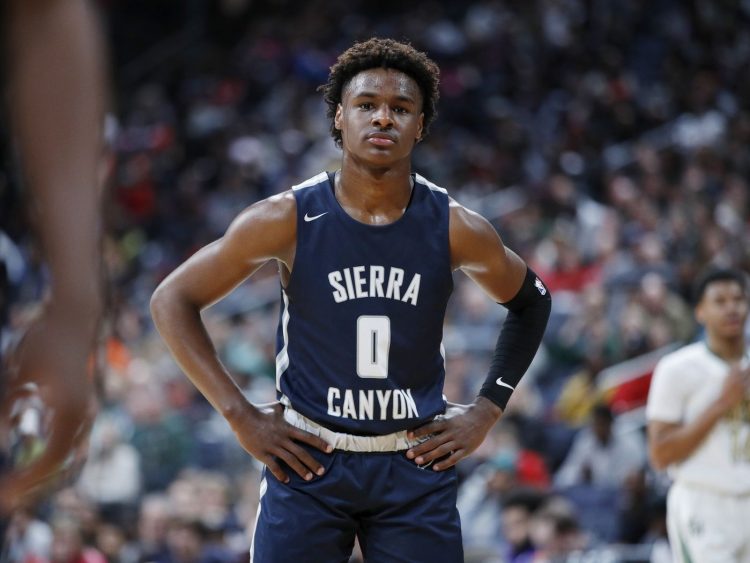 Children of famous athletes do not always have it easy, as they are held to unfairly high standards and unreasonably expected to either match or exceed their parents’ success if they play the same sport. LeBron “Bronny” James Jr, the eldest son of the legendary three-time NBA champion LeBron James, knows this all too well. James Jr. currently plays as a guard for California’s Sierra Canyon High School and though he is only a 15-year-old freshman, he is a skilled and talented basketball player in his own right. Bronny has no shortage of potential and even drew the attention of five-time NBA champion and Hall of Famer Magic Johnson, who said that Bronny could be “just as good as his dad or a little better.” Here are five questions and answers about Bronny James.

1. How tall is Bronny James?

Bronny’s height and weight are listed at 6’4″ and 176 pounds. Though Bronny is not as tall as his 6’9″, 250 pound physical beast of a dad, his size is good for his age and position. In any case, Bronny is still growing, so he may end up reaching between 6’6″ and 6’8″ when he reaches adulthood.

2. What is Bronny James’ ranking?

According to a list of the Top 50 players of the Class of 2023 by Nothing But Net Magazine, Bronny James is ranked no. 15. However, rankings are a bit subjective, as Bronny was also ranked 25th on Coast2Coast Prep’s high school senior Class of 2023 list in 2018, not as high as his father would have liked.

3. Does Bronny James shoot better than his father?

He does, according to LeBron James himself. In 2019, ESPN National Recruiting Director Paul Biancardi said on Twitter that Bronny’s jump shot was better than his dad’s. LeBron James agreed with him, saying that both Bronny and his second son Bryce Maximus have better jump shots than him.

Bronny has received scholarship offers and has drawn interest from many schools. In January 2020, North Carolina Central University (NCCU) offered James Jr. a scholarship. More recently, James Jr. received an offer from Kentucky, with Duke, Kansas, North Carolina and UCLA all showing interest, as reported by 247sports. In fact, Bronny has been receiving college letters and scholarship offers since he was 10-years-old, which drew the ire of his famous father, who said: “It should be a violation. You shouldn’t be recruiting 10-year-old kids.”

Bronny currently wears no. 0 as a member of Sierra Canyon. LeBron James mentioned in a 2015 Sports Illustrated interview that Bronny refuses to wear his numbers (no. 23 or no. 6 as a Miami Heat player) because “he doesn’t want people to know who he is.” Considering the fact that his name is literally LeBron James Jr, going incognito may be a bit difficult for him.