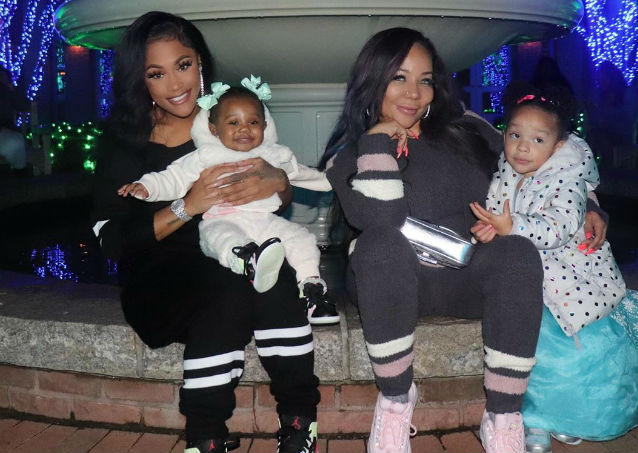 A peek into the future ; Mother of 2! 😂 K & Little Miss Heiress!! @fashionnova

“Moms,” Lira shared along with a picture of her and Khaleesi hanging out with Tiny and Heiress at the Christmas lights show. “Look at K’s smile on the last picture,” one Instagram wrote in pure adoration of Lira’s little girl. Khaleesi is one cute baby!

Heiress also garnered praise from social media for her absolute adorableness. The little one’s reaction to the decorations was captured while walking through the park. “[I] love Heiress,” one fan said. “She knows what she wants and she wants to see lights and decorations. She is too cute.” Isn’t she, though?

Went to see the lights 🤩

Heiress Harris has been out and about with her mom these past few months. The youngster recently attended a rehearsal session with her mom and even supported with backup vocals. “One of my background singers didn’t make it so Lil Miss Heiress decided she was gone fill in,” Tiny told her social media fans. “She was so serious,” the celebrity mom mused. “What y’all think,” Tiny asked her fans. “Should I add me another singer?” The masses agreed that Heiress deserved a spot on her mom’s team.

Tiny and Heiress are working to bring awesome shows to their fans, while Lira Galore is fighting for her rights as a parent. The celebrity mom previously filed documents that claimed her daughter’s father, Quality Control Music CEO Pierre “P” Thomas, was abusive during their relationship. Thomas recently responded to such allegations of abuse.

“Pee flat-out denies Lira’s allegations he was physically abusive to her a handful of times … including while she was pregnant with their baby girl. Further, he says Lira’s motives for suing him and making the abuse claims are suspect … and he points to his track record of caring for 8-month-old Khaleesi.”

DRAYMOND GREEN HAS SUPPORT OF FIANCEE AND KIDS AT JERSEY RETIREMENT