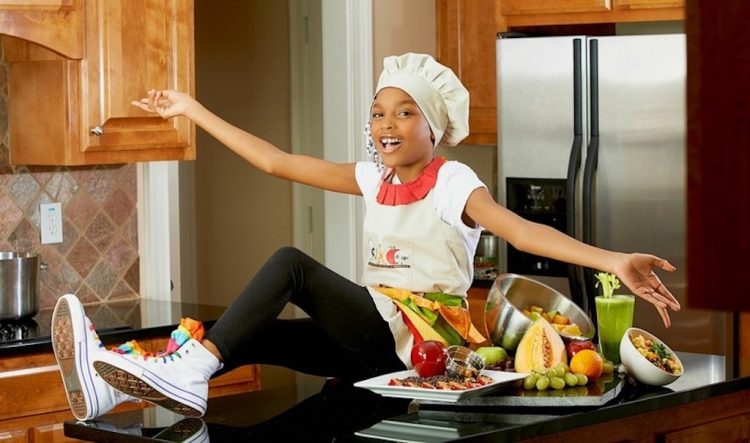 From Keto to Mediterranean to Vegetarianism and beyond, other options for the plate are becoming increasingly popular. One young lady has taken her palatable choice and created a profitable business, with a mission in mind to get her friends to choose healthier options by eating vegan.

Fourteen-year-old, Georgia-based teen Shiona “Shy” Curry, known as Shi LaChef, has been a vegan since the day that she was born. With the creation of her company, at just eight-years-old, S.N.A.C., (Shi’s Natural Approach to Cooking), she is definitely taking on the challenge of healthier eating. By hosting cooking clubs, workshops, and by selling her cookbook S.N.A.C. it up!, Shi is offering healthier options for a new generation.

VegeNews had the opportunity to sit down with this budding Vegan chef to get to know her better. Check out her interview in its entirety, and don’t forget to follow Shi on Instagram because you never know what she will be cooking up!

VegNews: Where did the idea for your company come from?
Shi LaChef: I love cooking, and I realized a lot of kids don’t eat healthy because they’re afraid the food won’t taste good. So I went on a mission to take foods kids typically think are disgusting and show them how good they can be.

VN: What are the two foods kids tell you they hate the most?
SL: Definitely Brussels sprouts and spinach.

VN: And how do you make them tastier, or “SNACalicious,” as you say?
SL: Don’t overcook them. Kids don’t like the texture of mushy veggies and won’t eat them. Plus, overcooking kills the nutrients. So with any veggie you sauté, start by lightly oiling a pan with cold-pressed safflower oil or vegan butter. Then, add your vegetables and only sauté for a few minutes. With Brussels sprouts, I like to add smoked paprika, thyme, garlic, light oregano, and a little Himalayan sea salt. With spinach, I sauté with dried rosemary, white pepper, and smoked paprika. I like to add spinach to other foods like my Smiling Heart Pizza Muffins or Lasagna. You can also add red and yellow peppers, onions, and fresh garlic—and the garlic and herbs will cut down on how much salt you have to use.

VN: When did your cooking career officially begin?
SL: I’ve been cooking since I was six. Being in the kitchen is my happy place, and it’s the story of how I got started. I’m the middle child between two brothers, and it was hard for me to fit in. I did a lot of mean things when I was young, and I wasn’t nice to my parents. My mom and dad tried everything they could, but when I started cooking, I found it was a passion. They encouraged me to get in the kitchen, and when I did, I got happy and haven’t stopped cooking since then.

VN: What’s it like to be raised in a family where everybody’s vegan?
SL: It’s really cool because we’re all eating the same plant-based foods so nobody has to feel bad or anything. Everybody in my family is a great cook, and I cook about three days a week for my family, not including any catering events I might have.

VN: What are some of your favorite things to make?
SL: I love baking but also sautéing vegetables, especially if it’s cauliflower or kale. My specialties, though, are Korean dishes, pastas, cauliflower wings, and my original Jamasian dish that I made up because I couldn’t make up my mind one day. I wanted Jamaican food and then I wanted Asian food, so I combined the two to make my own cuisine—which I call Jamasian.

VN: I understand that you’re homeschooled so you don’t have to worry about issues with being vegan at school, but what do your friends think of your veganism?
SL: When they find out I’m vegan, they often feel really bad about eating meat, and some of them have gone vegan because of me, which makes me really happy.

VN: When you do talks in front of kids, what do you say to encourage them to go vegan?
SL: I tell them there are a lot of benefits to going vegan. You can feel so much better going vegan. It’s the only body you’ll ever have so you might as well take care of it while you have it. I also tell them that they’re hurting animals when they’re not vegan.

VN: You’re really dialed into childhood obesity and diabetes. In fact, you’re passionate about helping kids overcome these two issues. Why?
SL: Childhood obesity touches my heart because there are so many kids with weight problems who come to me asking for help. Many of them have been picked on because of their weight, and I just wish I could take them all home and feed them really good vegan food and teach them how to do positive affirmations. With diabetes, I know a lot of people who have died from that disease, and I want to help people avoid that. I want them to eat healthier and, in the end, live longer.

VN: What tips do you have for kids—or anybody—who want to go vegan?
SL: First, shop for healthy ingredients and have fun cooking. Even if you’re their parents, make cooking fun. You’re more likely to eat the food when you have a hand in it. Second, drink lots of water. So many kids don’t drink a lot of water; the more you drink it, the more your body will crave it. Lastly, don’t compare non-vegan foods to vegan foods. When you compare vegan and non-vegan foods, they don’t taste exactly the same, and that’s because the vegan food has never had a mother or father. But by doing this, your mind decides your stomach won’t like the vegan food, and it makes it difficult to become vegan. Yet, if you look at it like it’s just food and season it properly, you can enjoy it even more because it tastes good and it’s good for you.

VN: So what’s on your immediate horizon and what do you want to do when you’re an adult?
SL: I’m working on a new cookbook, and I’ve got a part in an upcoming Netflix original series. I’m also working on new juice flavors. When I’m older, I want to be an actress and chef and open up restaurants in Paris, Italy, and Atlanta.

ANGELA SIMMONS THANKS HER DAD, REV SIMMONS, FOR BEING SON'S ROLE MODEL