KYLIE JENNER TWINS WITH HER ‘MINI ME’ STORMI WEBSTER 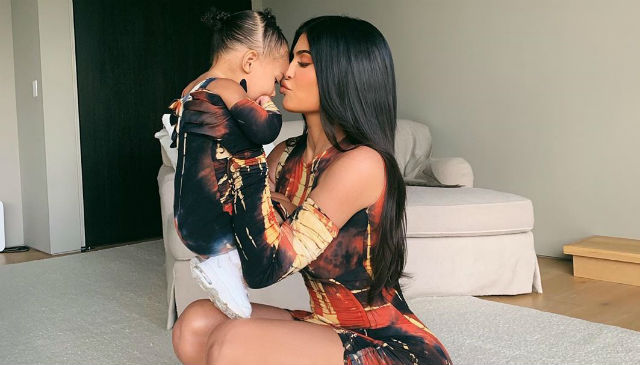 Kylie Jenner and her daughter, Stormi Webster, are twinning in their latest Instagram posts. The Keeping Up With The Kardashians star received more than 20 million likes for her latest series of mother-daughter candids.

One picture showed Kylie kissing Stormi on the head. Both the celebrity mom and her daughter rocked matching outfits in the candid. “Mini me,” Kylie captioned. Another candid in the series showed the KUWTK in straight model mode while holding her daughter. “Beautiful mama,” one Instagram fan wrote after seeing the candid of Kylie and Stormi together. They do make a cute pair, don’t they?

Kylie Jenner appears to be moving forward just fine after the drama that ensued between Jordyn Woods and Khloe Kardashian. In fact, Kylie showed herself to be the bigger person during a recent episode of Keeping Up With The Kardashians in which Kylie admonished her half-sister, Kim Kardashian, to take down an Instagram post that appeared to bully Jordyn after the alleged cheating scandal between Woods and Khloe’s then-boyfriend, Tristan Thompson, went public.

“I just feel like we’re bigger than this, we’re better than this,” Kylie told Kim. “I feel like call her or talk to her in person. … We just don’t need to bully anyone,” Jenner added. “The look in her eye, she’s just obviously going through it,” Kylie said while trying to hold back tears. “I just don’t think anyone deserves this. We should express everything to each other in person, however we feel.”

Tristan Thompson was accused of cheating on Khloe Kardashian with Jordyn Woods a few months back. The alleged affair ended Tristan’s relationship with Khloe and led some to label Jordyn as a homewrecker. Woods, however, explained her side during an interview in Red Table Talk. She refuted claims of her having a sexual affair, though Jordyn did admit to sitting on Tristan’s lap and engaging in a kiss at a party.

The drama surrounding the house party has been intense. Still, Kylie Jenner has maintained her character and advocated for decency in the situation. Stay tuned for more Keeping Up With The Kardashians news!