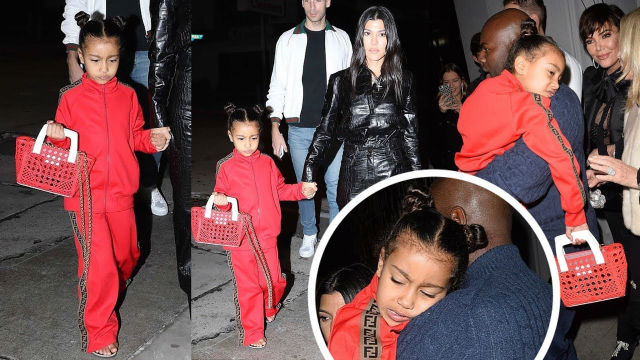 Forget Keeping Up With The Kardashian Kids! We can hardly keep up with North West!

North Kardashian-West was dressed in a head-to-toe Fendi as she accompanied her aunt Kourtney Kardashian and grandmother Kris Jenner to dinner at Craig’s in Los Angeles last night. Corey Gamble, who’s dating Kris, was also in attendance and carried North when she eventually fell asleep after a long night of fun.

For her excursion, the daughter of Kim Kardashian and Kanye West wore a red Fendi tracksuit and fluffy slides from the Italian label. The stylish duds retail for more than $1,000 combined, but that’s nothing for North who is accustomed to the finer things in life.

Just yesterday, the fashionable tot went into her mother’s closet and tried on $1,000 worth of footwear, including some prada heels that go for $550 a pop.

North in my closet ✨ pic.twitter.com/kAarAobhsP

MARRIAGE BOOTCAMP STAR, TIFFANY CAMPBELL, IS PREGNANT AND IT'S NOT BY LIL' FIZZ