It Was All About "Amazing Grace" 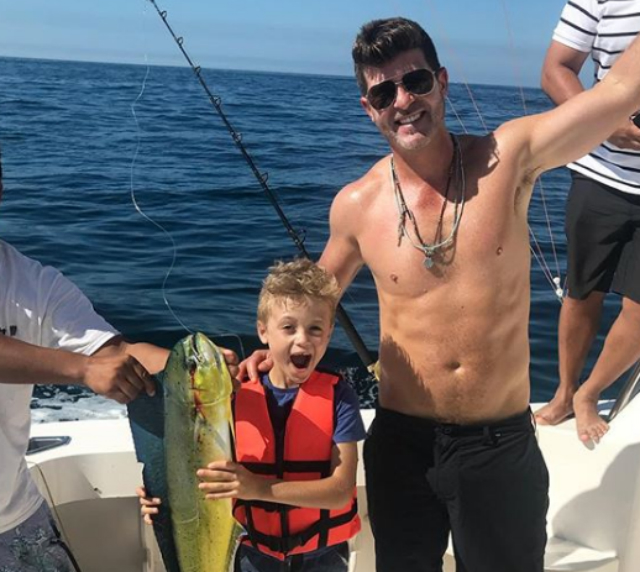 Aretha Franklin’s passing has led to a season of mourning. Robin Thicke and his son, Julian, joined the nation in honoring the Queen of Soul earlier this week.

Robin filmed his son singing the celebrated hymnal “Amazing Grace” with all passion. Julian closed his eyes and shared the lyrics to the moving song as those in attendance looked on in amazement. “Just wow,” one fan exclaimed. “And he remembered those words! I can’t even remember a whole song’s words. He is amazing.” Indeed, he is.

Robin Thicke was among many celebrities to pay tribute to the late Aretha Franklin after getting news of her death on Thursday. “Aretha,” Robin exclaimed. “GOAT! Thank you for your music! I know my Dad is there in heaven to greet you with love.”

Dozens took to Instagram to join Robin in shedding love on Aretha Franklin. “Aretha would have felt this love,” one fan said. Another of Robin’s followers wrote, “Rest in paradise, Queen of Soul!”

Aretha Franklin passed away on Thursday morning after a battle with pancreatic cancer. The late singer’s family released a statement regarding her death shortly after news of Aretha’s passing spread.

“In one of the darkest moments of our lives, we are not able to find the appropriate words to express the pain in our heart,” the family said. “We have lost the matriarch and rock of our family. The love she had for her children, grandchildren, nieces, nephews, and cousins knew no bounds.”

Aretha Franklin is known for her many hit singles including “R-E-S-P-E-C-T” and “(You Make Me Feel) Natural Woman.” Check out her 2015 performance at the Kennedy Center Honors ceremony below!

THREE THINGS THAT NO ONE TELLS YOU ABOUT BEING PREGNANT

THREE THINGS THAT NO ONE TELLS YOU ABOUT BEING PREGNANT