REGGIE BUSH AND THE FAMILY WILL NEVER FORGET THE ARMENIAN GENOCIDE 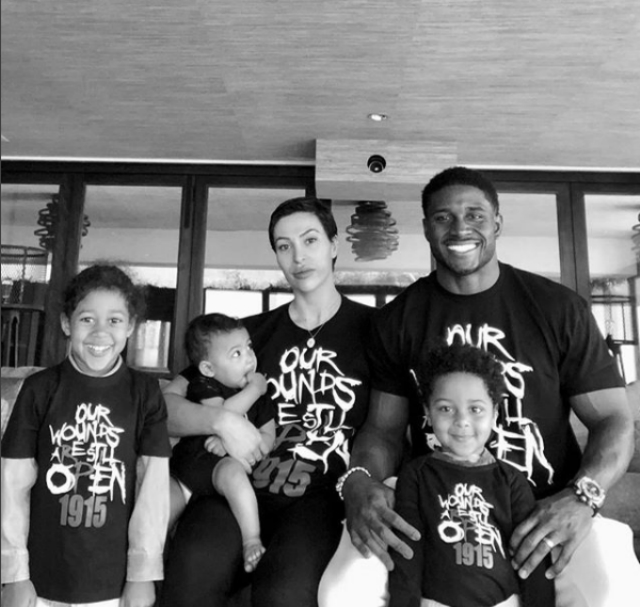 Reggie Bush and his wife, Lilit, are joining others in spreading the message of hope. The celebrity father posted a picture of him with his wife and kids wearing shirts that broached the subject of the Armenian Genocide of 1915.

Reggie and the family’s shirts read, “Our Wounds Are Still Open: 1915.” The statement was in reference to the mass killing of 1.5 million Armenians, many of them citizens, during the Ottoman Empire reign of the twentieth century. Turkey still refuses to acknowledge the tragedy as genocide, but what else would you call the singling out and mass killing of a group of people?

“From us to our kids and down to their kids and on and on will never forget #1915neveragain,” Lilit wrote online on the one hundred and third anniversary of the 1915 event. “Armenian Genocide will not be forgotten,” she continued. “My heart belongs to my roots.”

Both Lilit and Reggie’s hearts belong to their roots and kids. It was just a few months ago that Reggie told the press that he would play football again but would never push his kids towards a life of professional athleticism. “I would do it again but I wouldn’t be pushing my kids to play [football],” Reggie revealed.

“Whatever my kids want to do I’ll be there to support them,” he added. “If they end up wanting to do it then I’ll make sure they know everything about this game and what comes along with it. It’s a grown man’s sport.”

Lilit and Reggie Bush are the proud parents of three kids. The couple’s oldest child, Briseis, celebrates her fifth birthday next month.