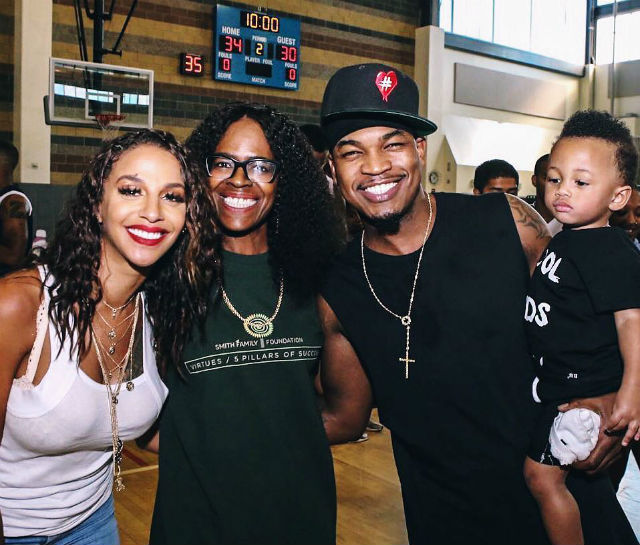 Ne-Yo and the family were the charitable bunch this past weekend. The recording artist joined other celebs in giving back to the community through a game of basketball.

The Inaugural Celebrity Basketball Game was held at the Miguel Contreras Learning Complex in Los Angeles on Saturday and served to benefit Ne-Yo’s Smith Family Foundation. “No child left behind,” Ne-Yo’s wife, Crystal Smith, wrote online after the event. “As a former foster care child, it truly makes my heart smile seeing so many people supporting such an important cause. You guys rock!”

Ne-Yo also expressed gratitude in the magnitude of support that his inaugural game earned. “It’s not about big name celebrities, it’s about money raised for these kids,” the celebrity father explained. “We deal very heavily in childcare — kids in foster care, kids in group homes — the so-called forgotten kids in society. We’re there to let them know that through the programs that we do, for once, someone gives a damn about you. We also want them to know that where you come from and where you end up don’t have anything to do with each other.”

A big thanks to everyone who came out a supported #TheSmithFamilyFoundation! We had a blast!!!! ESPECIALLY SJ! ? #DanceMachine #philanthropy #GiveBACK Thank you @1j.silver for all your hard work ❤️

This past weekend was definitely one of fun for all participants in the charity event. Tammy Brawner of the Harlem Globetrotters stopped by with her daughter, Zoey McCrary. “She said, ‘I clap for mommy’….little does she know I’m her biggest fan,” the star mom doted on her daughter. ” Had such a great time playing in @neyo charity game!!! And I always appreciate the love everyone gives Zoey!!! She had soooo much fun.”

She said "I clap for mommy"….little does she know I'm her biggest fan! Had such a great time playing in @neyo charity game!!! And I always appreciate the love everyone gives Zoey!!! She had soooo much fun!!! ?: @montyimages

Ne-Yo’s youngest son, Shaffer Jr., was also in attendance at the event. The little one was featured in several shots on the red carpet as well as inside of the venue.

Little Shaffer is Ne-Yo and Crystal Smith’s only child together. Ne-Yo also has a son and daughter with children’s book author, Monyetta Shaw. Check out two bonus pics of little Shaffer below!

Family over everything ? #TheSmiths @neyo