Home » NEWS » MADONNA SHARES CANDID OF ALL SIX OF HER KIDS 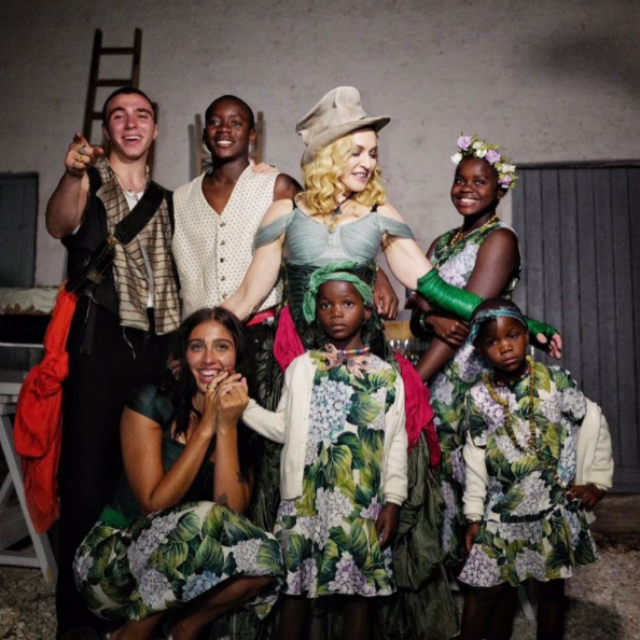 Now, this is a first! Madonna recently shared a candid of her with all six of her children and it is simply gorgeous.

Lourdes and Rocco, who are rarely seen with the family these days, were in the photo along with Madonna’s younger children. David was just as tall as his older brother, and Lourdes held one of the twins’ hands as she knelt down in the candid. Mercy was also in fashion sync with the women in the picture as she wore green along with head gear that resembled that of a flower crown. “Birthday,” Madonna captioned.

The ‘Material Girl’ singer added to her party of six earlier this year. Estere and Stelle joined their siblings at home after a top-secret adoption process from Malawi.

Madonna has definitely faced her fair share of criticism over the years with quite a few haters taking shots at her family. “I’ve always felt oppressed,” the singer said in an interview with Harper’s Bazaar published in January.

“I know a lot of people would go, ‘Oh, that’s ridiculous for you to say that. You’re a successful white, wealthy pop star,’ but I’ve had the sh*t kicked out of me for my entire career, and a large part of that is because I’m female and also because I refuse to live a conventional life,” Madonna explained. “I’ve created a very unconventional family. I have lovers who are three decades younger than me. This makes people very uncomfortable.”

Still, even with their discomfort and subsequent attacks, Madonna manages to let her creativity flow. “Art keeps me alive,” she revealed to Harper’s Bazaar. “I’ve obviously been devastated or heartbroken all my life, since my mother’s death. I’ve had so many challenges throughout my career, however, successful people perceive me to be. The only way I’ve been able to survive the betrayal of lovers, family members, and society is to be able to create as an artist.”