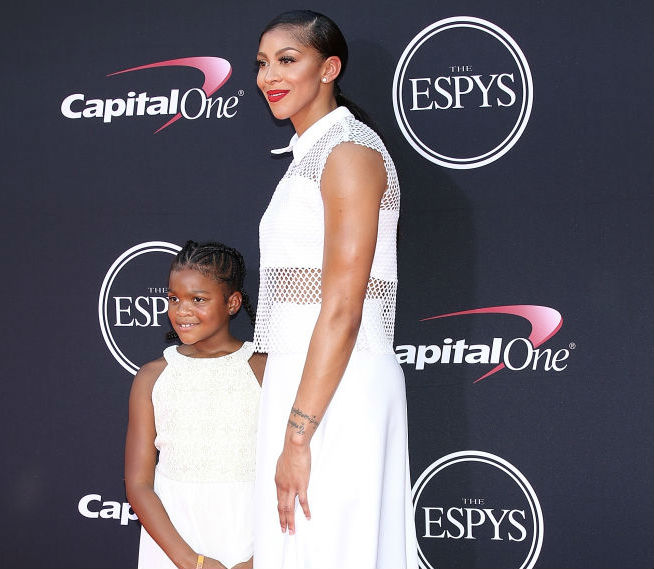 Candace Parker was one of the honoree’s of the night at the 2017 ESPYS Awards on Wednesday. The ceremony was held at Microsoft Theater in Hollywood, California, and Candace had her daughter, Lailaa Nicole Williams, by her side on the red carpet.

Parker was the recipient of the ESPYS’ “Best WNBA Player” Award. The star athlete led the Los Angeles Sparks to its first championship in more than a decade last year. The victory came just days after the team’s former coach, Pat Summitt, passed away.

Candace attributed her success on the court to Pat and paid tribute during the 2017 ESPYS Awards. “Not too long ago my coach, Pat Summitt, was honored on this ESPYS stage,” Candace told attendees. “Every day, I carry a part of her with me. I have the words she taught me tattooed on my forearm: ‘left foot, right foot, breath. Repeat.’ She lived it until the very end.”

Candace told media how much her former coach impacted her life during an interview months before winning the 2016 WNBA Championship series and learning of Pat’s passing last year. “I think the biggest thing is … you know a lot of people say the right things, but very few live it and demonstrate it in the toughest of times and the greatest of times,” Candace shared. “You know, some people are, ‘do as I say not as I do’ but she walks the walk. And when you have someone that sets such great examples, it inspires you that much more to be like her.”

Candace Parker is the proud mother of one child. Lailaa celebrated her eighth birthday in May.