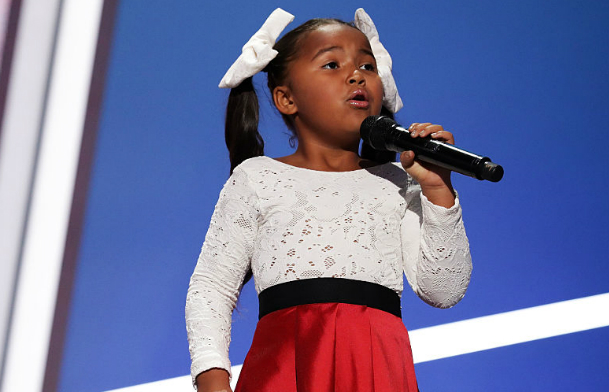 Heavenly Joy Jerkins brought the house down at last night’s GOP convention. The 6-year-old opened the event with two songs that had everyone on their feet.

Heavenly began her presentation with ‘Let There Be Peace On Earth.’ The crowd began cheering when the little one hit a high note near the end of the selection. Miss Jerkins then moved on to ‘America The Beautiful’ where she put her spin on the words and tone of the song. Many were in awe of the little one’s talent and could do nothing more than cheer at the end of her presentation.

This isn’t the first time that Heavenly has amazed her public and spread hope. The little one stopped by the TODAY show last year to encourage Kathy Lee-Gifford after the co-host’s husband passed away. Kathy told viewers that Heavenly’s spirit was inspiring during her time of bereavement.

Heavenly Joy Jerkins is the daughter of Joy Enriquez and Rodney Jerkins. Watch her performance at the GOP convention below!