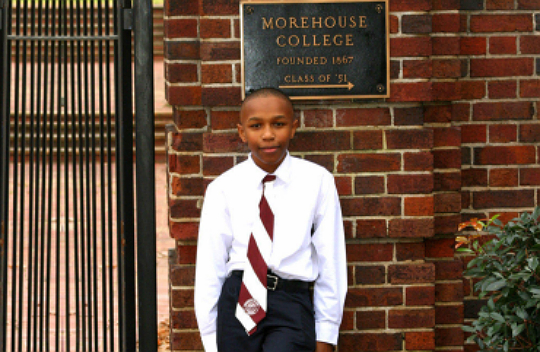 Talk about impressive! Stephen Stafford is set to graduate from Morehouse college with triple majors in pre-med, mathematics and computer science. Did we mention that he’s only 17-years-old? The teen expressed nothing but gratitude in his educational journey thus far, which began when he was 2-years-old.

Stephen obtained a passion for learning as a tot, and his parents began homeschooling him. His excitement about math and science progressed over the years, which caused him to set his sights on a career in medicine.

Now, as one who is on the clear path towards his goal, Stephen is anything but complacent. “I look back and see all the stuff I’ve done. I know, yes, I’ve done a lot, but I can do a whole lot more,” says the teen. “I want to live up to my potential. Potential doesn’t have a limit. It’s like a rainbow. You can constantly keep chasing it and you will never get to it. And I know I don’t have any limits as long as I keep trying.”

Trying is definitely what Stephen will continue to do as he plans to attend the Morehouse School of Medicine to focus on obstetrics and specialize in infertility. “I want to help babies come into the world,” shares the young scholar. “I’d also like to develop my own computer operating system. At one point, I will live outside of the country for a few years. And when I come back, I am thinking about moving into the city. I just love the idea of the city, like downtown Atlanta.”

Stephen Stafford expects to complete medical school by the age of 22.