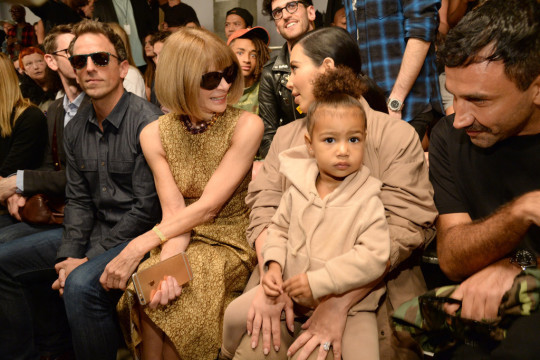 North West sat front row at her dad Kanye West’s Yeezy Season 2 show at New York Fashion Week on Sept. 16. The two-year-old sat on her mommy Kim Kardashian’s lap and was well-behaved for the most part. You may recall that little Nori threw a tantrum during Kanye’s debut show at the beginning of 2015.

This time around, North sat down quietly on her mom and later hopped on her Aunt Kourtney’s lap. The tot was later held  by a number of other people, including  aunties Khloe and Kendall, and daddy Kanye.

Kim’s sisters Kourtney and Khloe Kardashian,  and Kendall Jenner all sat in the front row while friend to the family, Jaden Smith, watched from the second row. Kylie Jenner  was also in attendance, but walked runway.

Kim is expecting her second child, a son, with West in December.