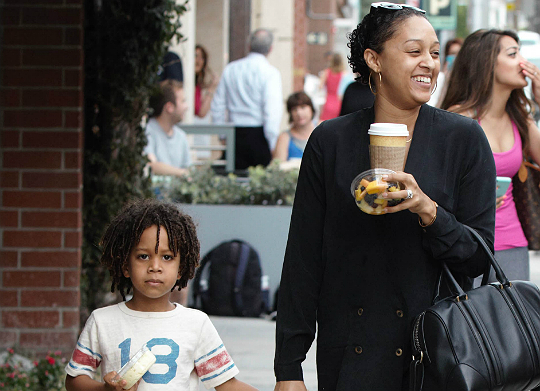 Tia Mowry-Hardrict is not as strict as some may think. The celebrity mom tells Yahoo! Parenting that her approach to parenting is less traditional than her sister Tamera Mowry-Housley’s way of rearing.

“I’m less traditional than Tamera,” says Tia. “Cree only started sleeping in his own bed when he was three and a half. My husband was fine with that. Tamara is more by the book, like my own mom who says, ‘Why does Cree still have a bottle in his mouth?’ I say, ‘Mom, he’s not going to college with a pacifier or co-sleep when he’s a teen.’ But Tamara and I give each other advice and learn from each other.”

Although lenient, Tia puts her foot down when dealing with the possibility of Cree beginning a career in show business at a young age. “People have suggested that he model but I want him to be a kid,” shares the star. “I studied psychology in college so I know that the first five years of a kid’s life are so important. When Cree gets older and if he shows interest in taking pictures, then we’ll entertain it.”

Cree is sometimes featured on Tia’s cooking show, Tia Mowry at Home, which airs on the Cooking Channel weekly. The 4-year-old celebrated his birthday in June. Cree is Tia and husband Cory Hardrict’s only child.

THE LILES VACATION IN SOUTH AMERICA