Home » NEWS » SASHA AND MALIA ARE READY TO CAMPAIGN

SASHA AND MALIA ARE READY TO CAMPAIGN 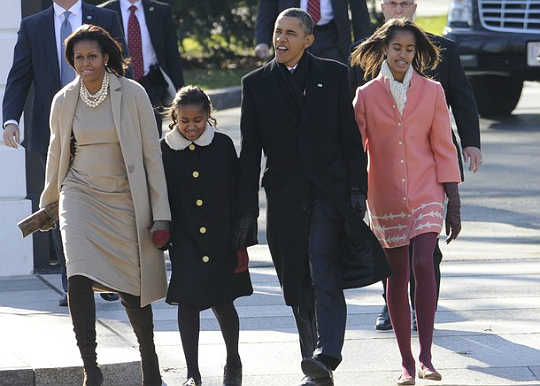 Malia,13, and Sasha,10, are hyped and ready to campaign for their father’s endeavor to have a second term in office. In a recent interview with the Washington Post, First Lady Obama revealed that the girls love interacting with campaign workers during election season. As she explains,

“When they were younger, when we were first running, what was campaigning? Campaigning was you fly into a city with a bunch of young campaign workers who love kids, and they took them for ice cream. I mean, one day I counted it — this was before ‘Let’s Move!’ We were back on the plane and I found out exactly what they were doing when I was on the stage. They had had ice cream four times that day. So Sasha is like, ‘I love campaigning!’ They’re ready to go.”

Although President Obama is striving towards re-election, he does not neglect his family in the race. Michelle was sure to tell the Post that Barack “hasn’t missed a [basketball] game” that Sasha has played in and even manages to coach the team on his spare time.

During their race for office the Obamas have managed to raise funds and connect with citizens throughout the nation. If elected for a second term, Barack Obama will be the first African American to serve eight years in the office of president.

KYLA PRATT AND BOYFRIEND SHOW OFF DAUGHTER IN COMIC STRIP