Home » NEWS » KIMORA IS FASCINATED WITH HER SON’S PRIVATE PART

KIMORA IS FASCINATED WITH HER SON’S PRIVATE PART 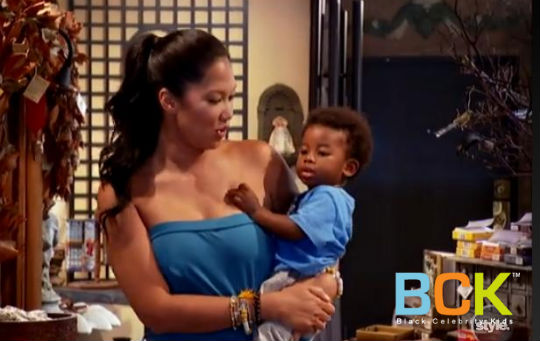 Kimora is completely enamored with her 1 1/2-year-old son Kenzo Lee Hounsou(dad is actor Djimon Hounsou). So much so that she constantly talks about his  private part(yes, seriously).

She tells Popeater, “My husband told me I have to stop talking about his penis, but I’m so obsessed with it because I always wanted a boy. He’s always running around saying, “Boobies.” He’s so rambunctious, and he’ll jump over everything. When I’m changing his diaper I’m always calling my husband in and saying, “Look, look at it now.” He’s like, “Honey put the diaper on, it’s normal.” And I’m like, “Is it normal that it should be so firm when I’m changing the diaper,” and he’s like, “Yes, leave the kid alone.” It’s weird, boys from girls. They don’t want to play with dolls. With girls they can sit quietly in a corner and play with dolls or books, and he wants to throw the book or jump off the bed with the doll’s head. I realize he has no fear of dying. He wants to jump off everything.”

Of her daughters Ming, 11 this month, and Aoki,8, (with ex-husband Russell Simmons), she says, “They’re definitely mini moguls and fashionistas. They’ve been with me on every runway. They’ve done capsule collections. They cut and sew, and they have sewing machines in their rooms.”