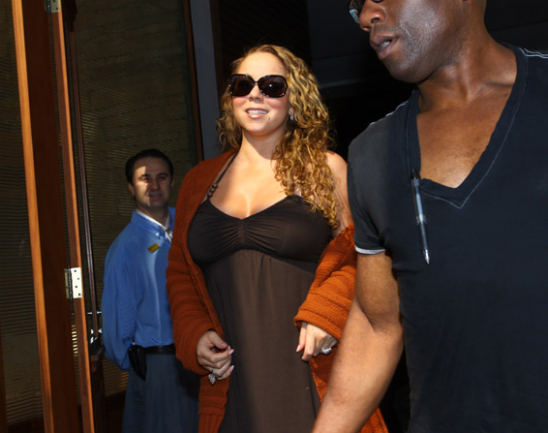 They say a picture is worth a thousand words so perhaps this photograph of singer Mariah Carey in a Spaghetti Strap Halter maternity dress may be speaking volumes to you. Mariah, who is rumored to be four months pregnant, was photographed in the brown Maxi dress on a outing in Brazil last week.

Neither Mariah nor her husband Nick Cannon have confirmed the pregnancy rumors, but Nick has said the following:

“That’s something you want to keep near and dear and as close to you as you possibly can, until you’re 100% sure, in any situation,” he says. “There’s a certain time limit you’re supposed to wait before you can actually officially say that you are and all that stuff. You don’t want to mislead anybody.”

Mariah’s dress is available at ApeaInThePod.com

BLAIR AND SONS AT UNIVERSAL STUDIOS

TAMEKA "TINY" AND THE OMG GIRLZ AT THE TAKERS PREMIERE

TAMEKA "TINY" AND THE OMG GIRLZ AT THE TAKERS PREMIERE