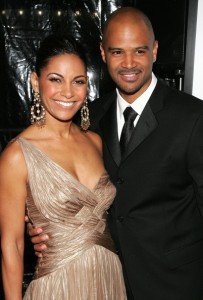 One may have seen the comedienne in film I am Legend with actor Will Smith. Salli has also appeared in various films such as CSI Miami, House, New York Undercover, and Eureka.

Married since 2002 to actor Dondre Whitfield, the couple are happy to have a little brother for their daughter Parker,3.

KIMORA, DJIMON AND THE KIDDIES OUT AND ABOUT