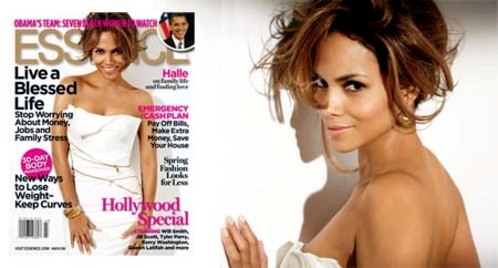 Actress Halle Berry is gracing the latest cover of Essence magazine. In the March 2009 issue, Halle opens up about her love for her daughter Nahla(almost 11 months old), as well as for Nahla’s dad, Gabriel Aubry.

On dating a White man:
“I tried Black men. I tried,” she wails in a mock southern accent. “I married two Black men. You know I tried.” She laughs again before making clear that “I don’t hold all Black males responsible because of the two bad eggs I got. I even dated Black men after my last divorce, but this is just where I found love.”

On her longevity in Hollywood:
“Setbacks energize me. They make me realize that I have more work to do.”

On being a mom:
“I thought I knew love before, but I never knew anything like this.”

On going bald for a role:
“I am shaving it off,” she says. “I know. Here comes the controversy, but I have to do it for the role and it will grow back—I hope.”

On leaving a legacy for her daughter:”I don’t want my daughter to look back at my work and think, ‘Mom sold out.’ I want to leave a legacy that she can be proud of.”