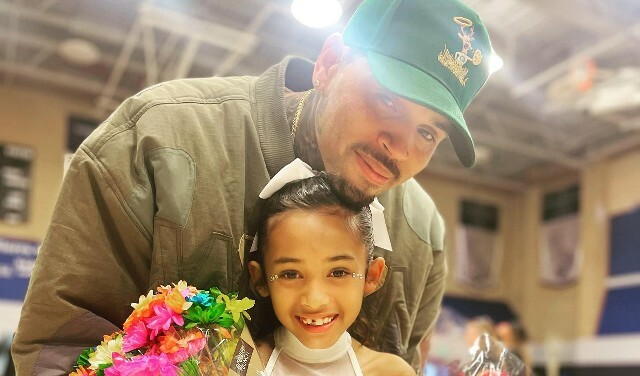 Chris Brown and Nia Guzman supported their daughter, Royalty, at her school recital this past weekend. The proud parents shared pictures and video footage from the event.

“[You] made your family so, so proud,” Nia told Royalty. Chris Brown took a picture of him with his daughter after the event. The celebrity father beamed while embracing his little one.

Royalty is nurturing her spirit of dance. Some may remember when the youngster dancing impromptu a few years back. Royalty has since began lessons that teach her how to better hone her natural abilities while also building new skills.

“Looks like that talent runs in the blood,” one fan said a few months back after watching Royalty catch on to the choreographed moves her dance instructor was teaching. “Royalty is so talented like Chris, her father,” another social media follower agreed.

It is unclear if Royalty Brown will follow in her father’s footsteps as an entertainer in the near future. The youngster continues, however, to build a resume that is quite impressive. To date, Royalty has garnered several promo gigs and opened her own business with help from her mom. The youngster also has thousands of Instagram followers who consistently engage with her social media posts.

Royalty has taken advantage of opportunities that have come her way while “It’s very humbling, and it’s very calming,” Chris Brown said of his life as a dad after welcoming his daughter in 2014. “Being able to be a father and seeing my daughter from those gradual stages — from crawling, to walking, to saying words, to learning different things every day — is kind of teaching me patience and it’s been great.”

Royalty Brown is Chris Brown and Nia Guzman’s only child together. Chris also has a son named Aeko with model Ammika Harris who turns 3-years-old this year.