Home » NEWS » ROBIN THICKE AND PAULA PATTON’S SON, JULIAN, IS A LITTLE STAR IN THE MAKING

ROBIN THICKE AND PAULA PATTON’S SON, JULIAN, IS A LITTLE STAR IN THE MAKING 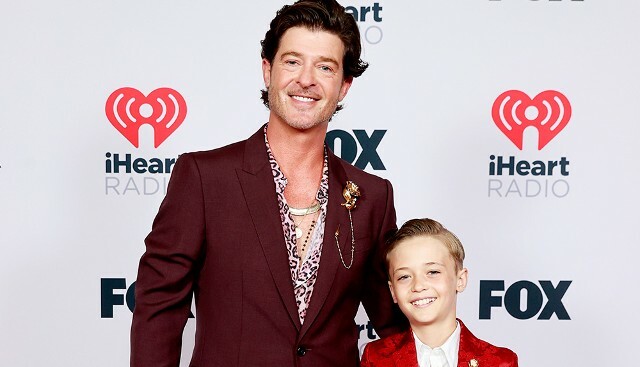 Robin Thicke and Paula Patton’s son, Julian, is a star in the making !

Over the weekend, Robin shared a video clip of his son singing in a school choir that gave fans a taste of Julian’s vocal abilities and stage presence. “Like father, like son,” one fan said after watching the footage. “Whoa,” another social media follower exclaimed. “His voice is beautiful.”

Julian is Robin Thicke and Paula Patton’s only child together. The youngster comes from a family of entertainers as Robin’s late father, Alan Thicke, was an actor, songwriter, and game show host. Robin also has an impressive career as both a recording artist and songwriter with hits such as ‘Blurred Lines’ and ‘Lost Without U’ underneath his belt. ‘Blurred Lines,’ featuring T.I. and Pharrell, generated total revenue of $16.6 million in 2013, which led to Robin Thicke earning $5 million from the song.

Paula Patton has quite an impressive resume as well. Many remember her role in the film Precious (2009) as well as Hitch (2005). Patton’s more recent film, Traffik (2018), spread awareness about human trafficking.

“We’ve given it this name, sex trafficking, human trafficking, but it’s slavery. Period,” Paula Patton said of the movie in relation to the real-life act of human trafficking. “We need to see it as a far-reaching subject matter that doesn’t just talk about it as a kidnapping, but also the unfair treatment of people,” the celebrity added when discussing the movie.

Julian’s future is bright with parents who work in show business and support him every step of the way. Robin Thicke often shares posts on his Instagram page that dote on his son’s musical talents. “Julian Fuego Thicke,” Thicke wrote in a social media post a few weeks ago. “Wait till you hear this boy sang (sic),” the celebrity father told his fans. “Love you son.”