"Miles Is Already Coming For Your Crown" 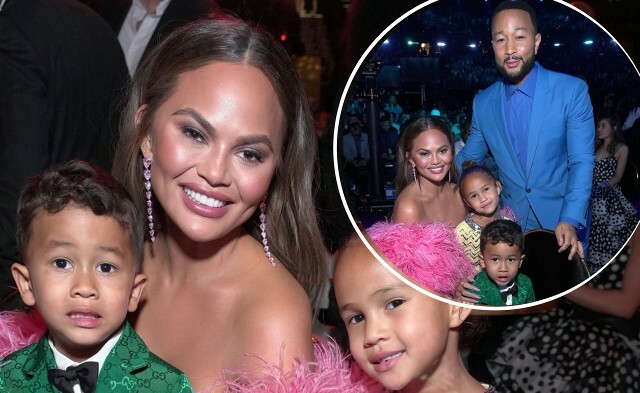 John Legend, Chrissy Teigen, and their kids, Luna and Miles, were dressed to impress for the 2022 Grammy Awards this past Sunday (Apr. 3). The little ones outshined their parents on the red carpet.

John admitted that he was “truly jealous” of his son’s outfit. “Miles is already coming for your crown,” one fan said after seeing a side-by-side post that compared John and Chrissy’s outfits to that of Miles and Luna’s at the Grammy Awards. Many agreed that Miled definitely “outshined” his father in the fashion areas.

John Legend captivated the audience onstage at this year’s Grammy Awards. The recording artist sang his new single, ‘FREE,’ which was dedicated to the victims of the war in Ukraine.

“It was an honor to perform ‘FREE’ tonight along with Lyuba Yakimchuk, Siuzanna Iglidan, Mika Newton, and our incredible choir,” John wrote online after his performance at the ceremony. “‘FREE’ was inspired by the spirituals and hymns of my enslaved and oppressed African-American ancestors, who were inspired by the Old Testament story of Moses leading his people to liberation from slavery,” the recording artist said of his new song.

“‘FREE’ is a prayer,” John continued. “It’s a prayer for peace throughout the world. A prayer for all the dispossessed and dislocated. The refugees of every nationality, religion, and skin color, longing for a safe place to live and flourish. [The song is written for] those who are left aside and forgotten. Those who are unjustly languishing in our jails and prisons. Those suffering from what Dr. Martin Luther King, Jr., called the three greatest evils: poverty, militarism, and racism. Those who are boldly speaking out against these evils, despite the threats to their lives or livelihoods.”

John Legend wrote ‘FREE’ one week after Russia invaded Ukraine. “I know I can’t end any wars with a song, but I had to write this song as my prayer, my contribution to the chorus of voices calling for peace and freedom for all people,” the singer shared. “I hope each of us can find our own way to contribute to this chorus. May we drown out the voices and forces of hate, bigotry, and authoritarianism. May we make our world truly FREE.”