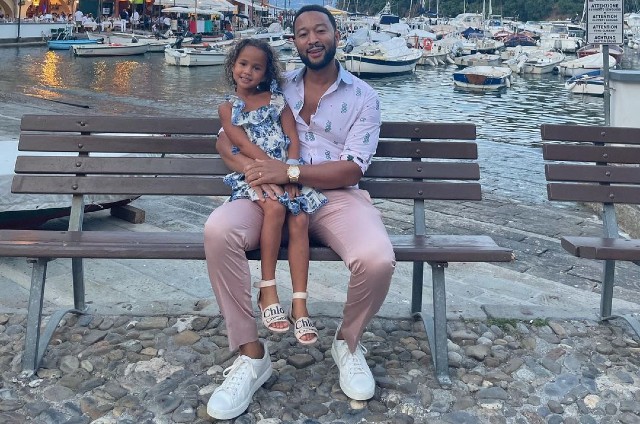 John Legend is vacationing in Italy with his wife, Chrissy Teigen, and their kids, Luna and Miles. The ‘Love Me Now’ singer and his wife recently shared pictures from their summer getaway.

John uploaded a video clip of his daughter, Luna, who had a blast with bubbles. Luna made circles while navigating the bubble gun. The youngster did not care about being in the middle of the sidewalk in Pisa but, rather, remained focused on the joyous vibes she was spreading in the moment. “Our superhero in training,” John Legend told his social media fans.

“She’s gotten so tall,” one fan said in response to John’s Instagram post. “Beautiful Luna,” the social media follower exclaimed. “What a little doll,” another subscriber declared. “So cute.”

John Legend and Chrissy Teigen are enjoying quality time with the family despite Teigen’s cyberbullying scandal. Chrissy gave a public apology for past tweets in which she intimidated celebrities. Teigen ultimately deleted her old tweets. The damage that she caused, however, had already taken root.

“There is simply no excuse for my past horrible tweets,” Chrissy Teigen told Medium readers a few weeks ago. “My targets didn’t deserve them. No one does,” the cookbook author added. “Many of them needed empathy, kindness, understanding, and support, not my meanness masquerading as a kind of casual, edgy humor. I was a troll, full stop. And I am so sorry.”

Some have scrutinized Chrissy’s apology as unauthentic. The celebrity mom, however, told her supporters that her kids’ opinion of her ultimately matters the most.

“I hope they recognize my evolution,” Teigen told her supporters. “My goal is to be so good that my kids will think this was all a fairy tale. Not the fake good. The good that has the best intentions, [and] the good who wakes up wanting to make her friends, family, her team, and fans as happy as possible.”

NICK CANNON SAYS HE IS HAVING HIS KIDS ON PURPOSE: 'YOU ONLY LIVE ONCE'

NICK CANNON SAYS HE IS HAVING HIS KIDS ON PURPOSE: 'YOU ONLY LIVE ONCE'