"Sugar And Spice And Everything Nice" 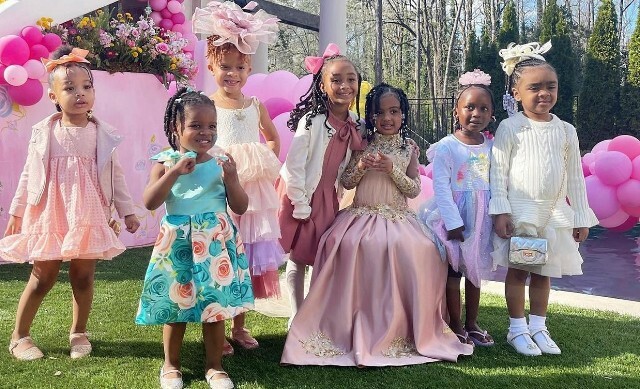 Happy Birthday to Pilar Jhena “PJ” McKinley, who turns three today. Porsha Williams gave her and Dennis McKinley’s daughter a lavish birthday bash that was fit for a princess.

Pilar enjoyed quality time spent with family and friends at her party. Toya Johnson and Lena Huggs were two of several celebrities to attend the bash with their daughters. Porsha managed to capture the essence of a tea party at her daughter’s celebration this past weekend. Pilar Jhena was definitely dressed for the occasion as she wore a beautiful dress that matched the elegance of the event.

Porsha Williams goes all out every year to make her daughter’s birthday celebration a success. The television personality spares no expense to bring her visions to life.

It was just last year that Porsha reminisced on her time of pregnancy days before PJ celebrated her second birthday. “Man sitting here reminiscing on how excited I was to finally be healthy and pregnant with my Lifesaver,” Williams told her social media fans. “I dreamed of carrying my lil angel and there I was filled with anticipation and joy until the day I would meet you,” Porsha wrote to her daughter.

Some may remember how Porsha Williams and Dennis McKinley attempted to rekindle their romantic relationship before ending the union for a second and final time nearly two years ago. Porsha has since moved on to cultivating a relationship with her fiance, Simon Guobadia, who also has children from previous relations.

Still, even with the demise of their relationship in the rearview mirror, Porsha and Dennis continue to strive to give Pilar Jhena a happy childhood.

“You have to give a true break to the romantic part of the relationship and focus on the child,” Porsha recently said in reference to her co-parenting efforts with Dennis. “If you’re still trying to get back together, it’s gonna mess everything up,” the Reality TV star declared.

MONICA AND KIDS GO TO DISNEY WITH SUPACENT AND FAMILY