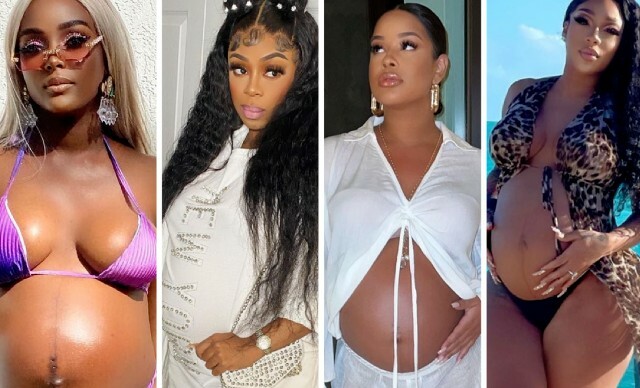 They are pregnant and ready to show off the baby glow! These expectant stars are loving the journey to baby. Check them out in this week’s Bump Watch!

Who says pregnancy can’t be sexy? Amara La Negra recently took to Instagram to give her fans an update about her pregnancy journey that was nothing short of sensual. The Reality TV star wore a bathing suit that showed off her bare baby bump. Amara also wrote a caption that gave further insight into the message she was trying to convey with her post. “Who said ’cause I’m pregnant I can’t be sexy,” the expectant star asked her social media fans. “I still got it,” Amara exclaimed.

Several fans agreed that Amara indeed still had her sensuality. “Go sexy mama,” one fan said after seeing the Instagram post on the celebrity’s social media page. “You look amazing,” wrote another social media follower in reference to Amara’s glow, which was evident in all the pictures she used to update her fans on her pregnancy journey thus far.

Jessica Dime is enjoying every bit of her pregnancy. The Love and Hip Hop: Atlanta (LHHATL) star recently took to Instagram to celebrate her journey while standing in front of the ocean. The water served as the perfect backdrop for Jessica’s picture. “Congratulations beautiful queen,” one social media follower said. “Such a beautiful glow,” another fan shared.

A post shared by Jessica Dime A.K.A Dimepiece (@iamdimepiece)

Jessica Dime announced her expectancy with her fiance Shawne Williams last month. Dime shared the news of the family’s expansion by uploading a picture of herself relaxing on a clear surfboard while wearing a bathing suit. “The greatest love … #2,” Jessica told her fans. Jessica and Shawne’s little one will make the couple’s daughter, Briel Williams, a big sister later this year.

Taina Williams has got the glow! The celebrity recently took to Instagram to share a picture of herself wearing a white outfit that showed off her baby bump.

Taina Williams and G Herbo announced their expectancy a few months back. The couple wished their fans well for the holidays while sharing the news of their family’s expansion. “Merry Christmas from our family to yours,” Taina told her social media fans. Williams also shared a video clip that showed her fiance’s reaction to the news that he would be a father of two kids.

Shay Johnson is looking forward to her life as a mom. The celebrity took to Instagram at the beginning of the month to give an update on her expectancy. Shay also addressed why she decided to keep her pregnancy a secret from her family until she was well into her second trimester of expectancy.

“A few family members are upset,” Johnson admitted. “I still can’t believe I pulled this off,” the expectant star said. “Happy and pregnant,” Shay told her fans in a separate Instagram post.

“You are going to make an awesome mommy,” one social media fan said after seeing a picture of Shay showing off her baby bump while wearing a white outfit. “Have a safe and healthy birth,” another supporter said. “God Bless.”