"It'Clear To See Who The Photoshoot Belonged To" 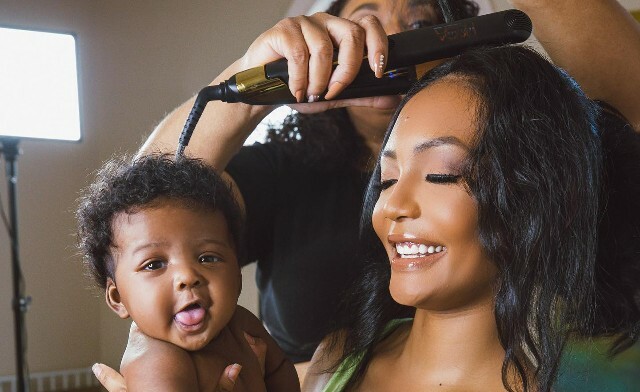 Falynn Pina’s daughter, Emma, stole the spotlight during a recent photoshoot with her mom. Keep going to see the pictures!

One picture showed Emma looking at the camera’s lens while sitting in her mom’s lap. Falynn was seated for a glamor session but all eyes were on Emma who smiled as the picture was taken. Another candid featured Falynn having her makeup applied. Emma looked at the camera’s lens with such intensity that fans could not turn away from the little one.

“It’s clear to see who the photoshoot belonged to,” Falynn told her fans after her recent session with photographer MorrisDe. “Gosh,” one fan exclaimed. “This beautiful baby looks like daddy’s twin.” Another social media follower said, “This baby just be (sic) serving us face every day.”

Falynn Pina and Jaylan Banks welcomed their daughter last November. Pina and Banks announced their expectancy via YouTube months before their little one’s birth. “We’re adding another little one to the crazy bunch,” Falynn told her social media supporters. “You are an amazing father figure the boys,” Pina told her then-boyfriend who made it a point to form a bond with her sons.

“I’m as ready as I can ever be,” Jaylan said during the YouTube video segment. “I’ve always wanted to have some type of father figure in my life, so I’m giving back to the boys what I’ve never received,” Jaylan said. “I’m ready to start the new adventure with you,” Banks told his partner.

Emma is Jaylan’s only biological child. Falynn Pina has three sons from previous relations. “Falynn did such an amazing job,” Jaylan told the press after Falynn gave birth to their baby girl last November. “She’s literally Superwoman,” Banks said of his fiancee. “Emma is beautiful and perfectly healthy.”