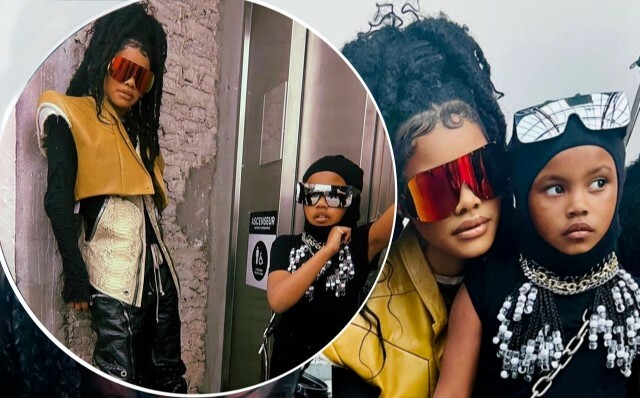 Teyana Taylor’s daughter, Iman “Junie Bug” Tayla Shumpert, is taking on Paris Fashion Week (PFW). The youngster recently took center stage” with a style that was nothing short of fierce.

“ICON,” Teyana said when describing her daughter’s outfit and vibes at Paris Fashion Week. Junie Bug was definitely ready for the spotlight as she walked down the street as if she were on the runway. “June is my favorite fashion girl,” Tameka Foster said after watching a video clip of Teyana and her daughter exploring Paris together. “She is ridiculous,” the supporter mused. Another fan described Junie as “the IT girl.”

Teyana Taylor and Iman Shumpert’s daughter certainly has a personality that is larger than life. Many remember her as the star of her parents’ Reality TV show while also reflecting on Teyana’s life as a mom on display in the series.

“[They’re] my best friends,” Teyana recently said of her kids. “I love my babies,” the celebrity mom doted. “Even through all this craziness, I’m obsessed,” Taylor shared.

“I’ve always wanted to be a mom,” Teyana went on to tell the press. “Even before I got to where I wanted to be, I knew that I would always have my kids with me everywhere I went.”

Junie has accompanied her mom on many trips and has even had the opportunity to take the stage at Teyana’s concerts. Many believe the youngster is well on her way to a successful career in show business because of her big personality. “It’s the Junie show,” one fan recently said after viewing pictures of Junie in Paris.

“Her and North about to take over the fashion world,” another Instagram follower declared in reference to the notion of Junie and North West being the celebrity children to follow in the fashion sphere.

Regardless of what route Junie chooses, it is clear she will have her parents’ full support. Teyana Taylor and Iman Shumpert have two kids, Iman Tayla and Rue Rose, together.