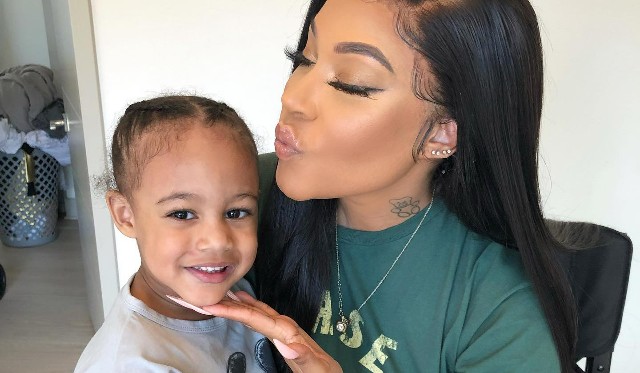 Lyrica Anderson and A1 Bentley’s toddler son, Ocean, has released his first single. Lyrica gave her Instagram fans a snippet of the song earlier this week.

The Bad Hair Day singer uploaded a video that featured her son singing the lyrics of his song while the single played in the background. “Every day I fall more in love with you #Ocean,” Anderson wrote to her son. “This is 3,” Lyrica hashtagged.

“Baby did that,” one fan said after listening to Ocean’s song. “And he’s feeling his track as he should,” the supporter continued. “The cutest thing ever.” Another fan said, “Go Ocean. He’s got the swag too. I can’t take it. Just adorable.”

Ocean is Lyrica Anderson and A1 Bentley’s only child. The celebrities wed in 2016 after a courtship that involved love and a war between their mothers. Lyrica filed to divorce A1 last month despite the two trying to restore the romance on Marriage Boot Camp.

Lyrica and A1’s marital issues have been ongoing, which led to separation years before Anderson filed for marriage dissolution. Lyrica decided to express her feelings about her relationship with A1 in her latest project, Bad Hair Day.

“Bad Hair Day is kind of like when you wake up and you’re trying to do your hair and you’re just like, saying you’re trying to get a particular style, and it’s just not working out,” Anderson recently told Hollywood Life of her latest album. “That can be the start of a messed up day,” the recording artist added. “And you’re kind of like, ‘I’m irritated, my hair is not coming out right.'”

The celebrity went on to tell the media source how she moved on after separating from A1 Bentley. “I moved and I met someone else and I was like confused now because I’m like, ‘Oh my gosh, I’m like, ending that [relationship] but I met someone else I’m feeling, but it’s like, ‘What do I do with this?'” Lyrica said of her feelings when dating after leaving her husband. “Up until that point, [I] hadn’t really dated anyone [because I’d] been in a relationship with the same person for so long.”