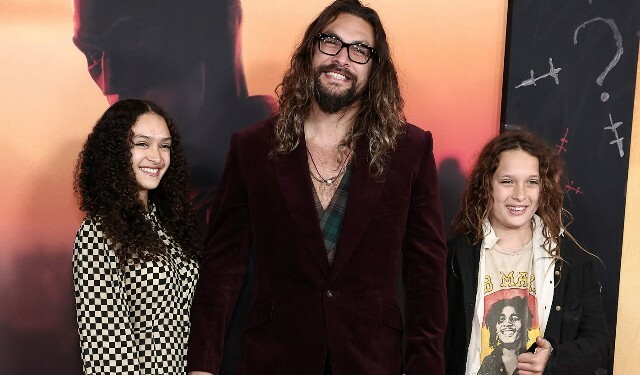 Jason Momoa had his kids, Lola and Nakoa-Wolf, accompanied him to The Batman world premiere in New York City on Tuesday (Mar. 1). The celebrity father hit the red carpet sans his estranged wife, Lisa Bonet.

Jason and kids were all smiles as they posed for pictures. The trio were at the premiere event to support Zoë Kravitz, who stars as Catwoman in the movie. Zoe is Lisa Bonet’s first child with musician Lenny Kravitz.

Much speculation has surrounded Jason Momoa and Lisa Bonet’s decision to end their marriage. Jason broke his silence on his and Lisa’s relationship since news of their separation spread during his appearance at The Batman premiere on Tuesday.

“We’re just so proud,” Momoa shared with the press. “Lisa couldn’t be here so we’re representing, me and the babies,” the actor said. “We’re very excited to just be here… It’s still family, you know,” Jason asked in a sort of conclusive manner.

An insider recently told Hollywood Life exclusively that Jason Momoa and Lisa Bonet have decided to hold off on divorce in an effort to rebuild their marriage. “Jason moved back in with Lisa about two weeks ago and they are very much back together,” the family friend shared with the media source.

“They decided to work on things rather than throw in the towel because they have so much invested in each other,” the insider said. “[The kids are] obviously thrilled their parents have given marriage another shot. Everyone is really hoping that they can make this work this time around.”

Jason Momoa and Lisa Bonet were married nearly five years before moving for marriage dissolution. The celebrities courted one another for years before tying the matrimonial knot in 2017. Nakoa-Wolf and Lola are Lisa and Jason’s children together. Lisa’s oldest daughter, Zoe Kravitz, is Jason’s bonus child by marriage.