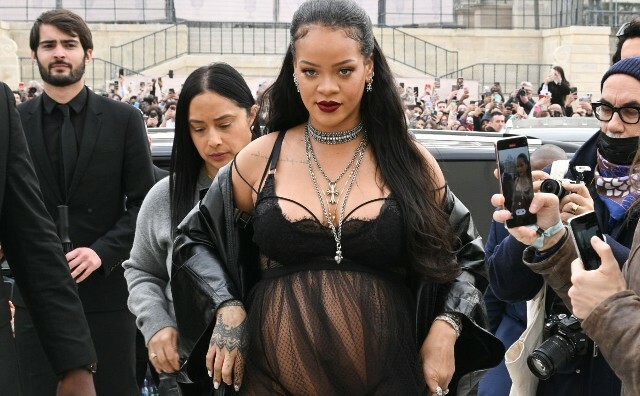 Rihanna is paying no attention to the critics who encourage her to “cover up” her baby bump. The mom-to-be recently stepped out in her sexiest maternity look to date.

The singer wore a sheer black dress while attending the Dior Autumn Winter 2022 show at Paris Fashion Week. The outfit resembled that of lingerie and went perfectly with the singer’s black knee-high boots.

Some have criticized Rihanna’s maternal stye as being too edgy.  “Enuff is Enuff (sic),” one critic recently said when expressing their dislike in Rihanna’s belly-baring maternity outfits. “There’s a time for everything,” the Internet user continued. “We all know that you’re pregnant. Pregnancy is something you can’t hide. Have some class, dignity and respect for yourself. My goodness”

Rihanna’s maternal type is intentional. The SAVAGE X FENTY creator recently explained to Refinery29 that she is trying to push the envelope when it comes to dressing her baby bump.

“Right now I’m really into pushing the idea of sexy,” Rihanna said during a recent interview. “When women get pregnant, society tends to make it feel like you hide, hide your sexy, and that you’re not sexy right now [but] you’ll get back there and I don’t believe in that sh*t,” the celebrity explained.

“I’m trying stuff that I might not have even had the confidence to try before I was pregnant,” she added. “The strappiest, the thinnest, and the more cut-outs the better for me,” the singer shared.

Rihanna is expecting her first child with rapper A$AP Rocky.

T.I.'S DAUGHTER, DEYJAH HARRIS, OPENS UP ABOUT SELF-HARM, THANKS HER PARENTS

T.I.'S DAUGHTER, DEYJAH HARRIS, OPENS UP ABOUT SELF-HARM, THANKS HER PARENTS