REGGIE BUSH, WIFE LILIT AND KIDS HAVE AN ‘AMAZING’ TIME AT NASCAR EVENT 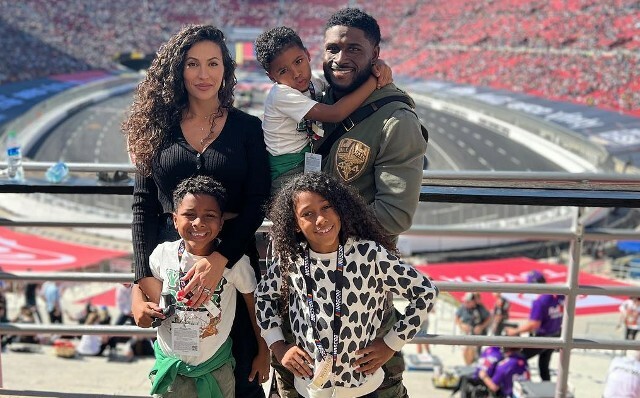 Reggie Bush enjoyed NASCAR’s “Clash At The Coliseum” with his wife, Lilit, and their kids this past weekend. The retired NFL player shared pictures from the family’s outing at the Los Angeles Coliseum in Los Angeles, California, on Sunday (Feb. 6).

“NASCAR at the Coliseum was special,” Reggie told his Instagram fans after the event. The retired football player also shared pictures from the outing that were nothing short of beautiful.

“Beautiful family Brother,” one fan said after viewing the pictures on social media. “I’m waiting on them to put that #5 back in its rightful place,” the supporter wrote in reference to Bush’s old jersey number. “As they should,” the fan further exclaimed. “Blessings and Honor to the Bush Family!”

Reggie Bush is taking time to enjoy family since retiring from the NFL in 2017. The celebrity father enjoyed quality time in Cabo San Lucas a few weeks ago. “Happy Holidays from the Bush Gang,” Reggie wrote to his social media fans. The celebrity father’s supporters especially loved pictures of Reggie and the family at the beach.

“I’ve been able to enjoy more time with our family and just being able to do things that I normally wouldn’t be able to be here for,” Reggie said of his life post-retirement during a recent interview with PEOPLE. “For 20-plus years, most of my time was devoted to a single sport,” Bush shared. “Now I get an opportunity to be home, and to find a new passion and keep my focus on top of my family.”

Reggie and Lilit, like the majority of parents in the United States, have evolved their rearing style in light of the coronavirus pandemic. Fitness has remained in the spotlight regardless of public health measures.

“They’re all active,” Reggie Bush told PEOPLE during his recent interview. “They’re all athletic, obviously — that’s a mandatory in the house,” the celebrity father said. “Everybody’s got to stretch, everybody’s got to exercise. That helps a lot to kill that energy during the day so they’re good to go to sleep.”

Lilit and Reggie Bush have three kids – Briseis, Uriah, and Agyemang – together.

KIM KARDASHIAN AND KIDS FEATURED IN LATEST ISSUE OF 'VOGUE'