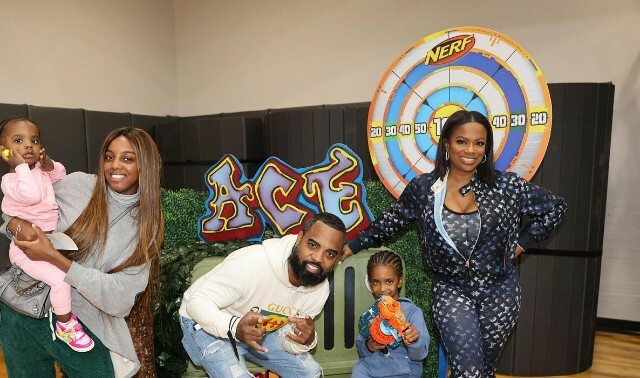 Kandi Burruss and Todd Tucker’s son, Ace Tucker, had the time of his life at his birthday party earlier this month. The six-year-old took to his Instagram a few days ago to share video footage from the Nerf themed party.

Ace turned six on January 6th, 2022. Kandi and Todd both took to Instagram to send birthday tributes to their only son.

In a sweet Instagram post, Todd wrote, “My Young King! You changed my life forever!” Todd wrote in the caption of the post, adding, “It’s been 6 amazing years watching you grow into a loving, smart, handsome young man. I hope to spend many more birthdays with you and watch you become the Man, the King, the leader [you’re] destined to be! Love you, Happy Birthday!!”

Kandi added, “My little superstar [Ace] turned 6 today!!!!” Kandi wrote in the caption of her January 6 post. She went on to add, “He has brought me so much joy since he came into this world. He’s smart, athletic, loving, caring, he has a great sense of humor, [and] the list goes on! Everybody give my baby boy some bday love!”

Ace and his family are giving fans an inside look at their lives in Atlanta with Kandi Burruss’ latest Reality TV series, Kandi & The Gang. The series focuses on Kandi and husband Todd Tucker’s restaurant, OLG, which started as a hit in 2017.

“Four years ago, my husband Todd and I started a family restaurant called Old Lady Gang. OLG was a hit,” Kandi says in the trailer of her forthcoming series. “But now it’s dysfunctional,” Todd shares. “Between your family and some of that staff, those people are crazy in there,” Tucker adds.

Getting OLG Restaurant back on track is a family affair that comes with its share of drama. According to a press release regarding Kandi & The Gang, “After being hit with a myriad of obstacles, Kandi and Todd step in with a plan to turn the tide. With tensions rising as family members don’t perform up to standards, a little tough love and a lot of restructuring will shake things up with the staff, whether they’re ready for it or not.”

Fans can always count on Kandi’s family to bring big personalities to the spotlight every time the Real Housewives of Atlanta (RHOA) star has a reality series of her own. Some may remember Kandi’s Ski Trip in which Burruss’ aunts accused her of changing for worse. There were many tears on the trip but the family ultimately came together to resolve their issues.