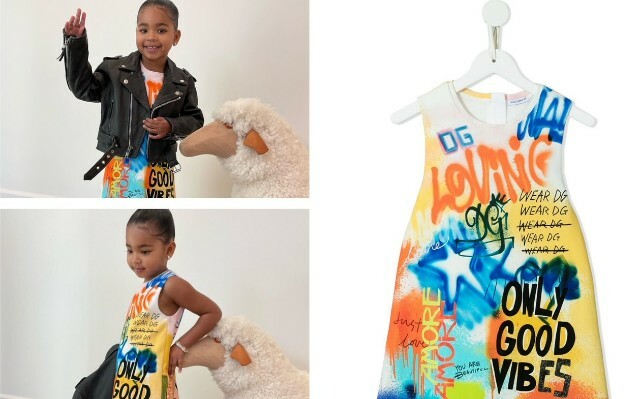 On Tuesday, the Keeping Up with the Kardashians alum, 37, shared a series of photos on Instagram of her 3-year-old daughter modeling a Dolce & Gabbana dress. True looked adorable in the snaps, posing in the graffiti-style piece along with a black leather jacket and matching combat boots.

Khloe Kardashian posted a slideshow of photos of her daughter rocking the Only Good Vibes Graffiti Dress which costs a whopping $495.

In the first photo, pictured above, True rocked the sleeveless, bright orange and blue patterned dress while looking off into the distance and holding on to her leather jacket.

In the second photo, True had her hand on her hip and rested her arm on her stuffed animal sheep behind her. She styled her swing dress with a pair of black patent leather Dr. Martens combat boots and high socks.

In the third photo of the series, True is proving that she is a supermodel in the making. Showing off her dress and jacket in all their glory, who would not love that amazing smile!

This adorable photo shoot in the $495 Dolce & Gabbana dress comes on the heels of Kardashian herself being criticized by fans after revealing on social media that she was selling her True’s clothes online via the Kardashian Kloset.

On this site, the Kardashian’s sell a range of secondhand clothing items, some of which have previously been worn by the family members themselves. Fans called the reality star “ridiculous” after prices are going for hundreds of dollars.

For example, True’s pair of secondhand Cat and Jack tights are being sold by Khloé for $20, despite being available for just $6.99 at Target.

And of course one Twitter user spotted this immediately, “Ummm the cat and Jack tights sell for $6.99 at Target, why are you listing them at $20 ?”

“Who would pay thar much for children’s clothing let alone used,” another Twitter user wrote. “Who gives a damn about brand names. So disgusted when these clothes could be donated to people I’m need. Everything is about money with the Kardashians! I gave all my stuff away to people that could use them.”

However, there were also those who supported Kardashian’s decision to sell her daughter’s clothes instead of donate.

“O please! She’s done more for charities and people in a month then you probably have. Why shouldn’t she sell them? O cuz she’s rich?! So that means she has to give her stuff away? I sell my stuff AND I give stuff away. Stop bashing her.”

“I don’t see anything wrong with her selling The clothes her daughter no longer is going to wear. A lot of those do the same in yard sales the problem is the price is too high for used clothes no matter who it’s from or what brand it is.”

What do you think? Weigh-in, we want to hear from you. But of course, there is one thing that we can all agree on, True looks adorable in her Only Good Vibes Graffiti Dress!