"Do You Have A Lace Front Or Were You Lace Fronted?" 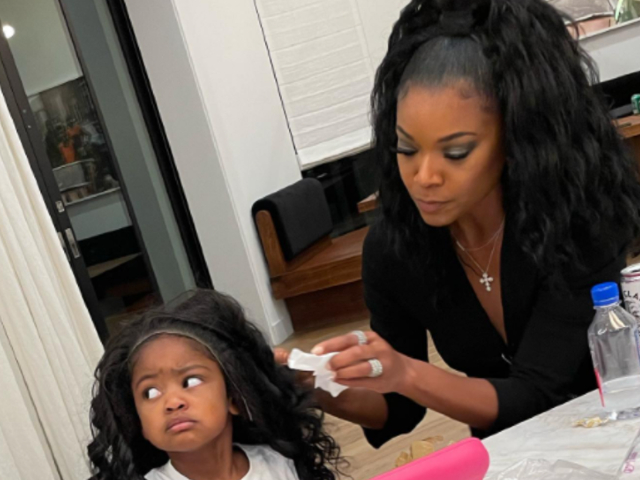 Kaavia James is bringing all of her shadiness to close out the week on a high note. The youngster was recently photographed while spending quality time with her mom, Gabrielle Union, at home.

Kaav and Gabrielle matched in style as the youngster rocked a wig that looked like her mom’s hairpiece. “Do you have a lace front or were you lace fronted,” the caption underneath the picture shared on Kaavia’s page read.

Gabrielle Union also posted the moment on her timeline. The L.A.’s Finest star provided a video clip featuring her and her daughter rocking their wigs. “Can’t take us anywhere,” Union said in reference to her and Kaav doing the most in the video clip.

“I can’t leave y’all alone for 2secs,” Dwyane Wade wrote in the comments section of his wife’s post. “It’s the hair for me,” June Ambrose said.

Kaavia James has nearly two million followers on Instagram who engage with her posts. Many love the captions Gabrielle Union gives to accompany the videos and pictures of her daughter. Other Kaavia James fans just can’t get enough of the little one’s facial expressions.

Indeed, Kaavia James has inspired her fans and her parents. Gabrielle Union recently deemed her daughter as the inspiration she needed to write a second memoir.

“In writing the first one (We’re Going To Need More Wine), there were a lot of chapters that I wrote that I just wasn’t ready to share,” Union said during an interview with Health. “I realized that some things that I covered in the first book were topics that, especially for women and specifically women of color, make you feel like you’re on an island by yourself,” the celebrity mom shared.

“And [the book] was creating community,” Union further explained in reference to the popularity of We’re Going To Need More Wine. “So, after a lot more therapy and my daughter being born, I revisited some of those chapters,” Gabrielle shared. “I find that the more painfully honest I am, the more impactful I am. You just have to talk about it. And finally, I’m ready. I’m as ready as I’m going to be.”

Gabrielle Union’s You Got Anything Stronger? made its debut on September 14, 2021. The book is available on digital platforms and in bookstores nationwide.